Archivist an Expert on All Things ‘Born Digital’

No longer primarily paper documents, donations to the Yale University Library now also come in digital forms and formats — including floppy disks, CDs, DVDs, and flash drives. Archivists are faced with a new and challenging dilemma: how to preserve “born-digital” collections in a form that can be read by available technology and also saved in a way that will be accessible in the future.

At Yale Library’s Manuscripts & Archives department, Mark Matienzo, Digital Archivist, is helping to develop strategies to reclaim and organize information that was created within the past 20 years — on media that may be already becoming obsolete.

Born-digital: In his job at Yale, Matienzo focuses on “born-digital” materials. This, he explains, means “anything that was created on a computer rather than paper. It is anything transferred over a network by a donor — if we’re receiving it as digital material — or if it was created digitally and has value to remain as a digital object.”

Past donations have included faculty “papers,” and materials on architecture, politics and jurisprudence, and the social sciences. One donation included an entire website, along with associated email, audio, and video files. Matienzo helps library staff get a sense of the donated content and makes recommendations about how to organize and maintain the information. 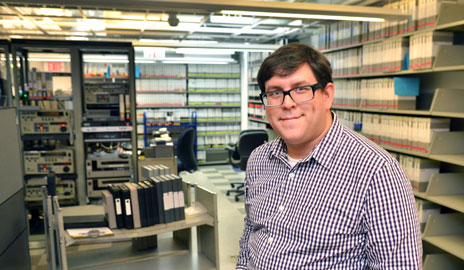 Lead digital architect: Matienzo must look at the whole picture: reading and retrieving the data off the digital media in which it was donated, considering the best way for it to be organized as a collection, deciding how to make the collection searchable and, finally, preserving the original donation as a part of the library’s broader collections. “I also do a lot of hands-on training and maintaining the environment that allows other people to do this work,” he says.

He notes that “one of the things that has been a challenge for us is how to make sure the information will be available in the future — part of it right now is just identifying the file formats that we’re receiving and trying to figure out if we can transform those files into something that will have a higher likelihood of lasting.” Matienzo explains that the process includes obtaining “a representation of the data on the disk in its most basic form.” To do this, he says, “We have a fairly sophisticated set-up with a couple of recent machines that have special floppy disk controllers.”

“One piece of software that we use to do a lot of the organizational work is called Forensic Toolkit™ — which happens to be an application used by law enforcement agencies to do analysis of digital evidence.” Matienzo notes that “it actually works really well to do the same sort of organization we would do with paper material.”

First recipient of Emerging Leader Award: In addition to his work at Yale, Matienzo has collaborated on projects with other universities helping to develop archiving tools that are intended to preserve historical collections in digital form. In August 2012 he became the first recipient of the Emerging Leader Award from the Society of American Archivists (SAA). “Matienzo played a critical role as the lead digital archivist on the Mellon-funded AIMS project, which developed a framework for the stewardship of born-digital archival materials within collecting repositories,” notes Anne Hartman of the SAA. “Although many individuals participated in these undertakings, it was clear to the committee that Mark has been instrumental to their success, using a combination of his archival knowledge, technical skills and leadership qualities.”

Matienzo said he “was surprised and delighted” to learn that he won the award. “The area in which I work is an area in which the profession tends to be struggling somewhat. I’ve found it’s a great opportunity to lead because, whether I like it or not, I’m now considered an expert.”

He adds, “I work with collections of cool stuff but I am also interested in the complexities — the different problems that all institutions face” he notes.

From conversations to collaboration: Matienzo says he has found Yale to be a fantastic place to work. “Yale is not without its challenges,” he says, “but I am impressed with how collegial everyone is here.

In fact, he says, the collegiality here is one of Yale’s biggest strengths. “I am impressed with how people across the library — and the University — are willing to share information and to help each other out. I’ve watched informal conversations turn into collaboration, and real projects that turn into something larger to benefit the University overall.”