COLLEGE PARK, Md. – Angelina Jolie heightened awareness about breast cancer when she announced in a New York Times op-ed that she had undergone a preventive double mastectomy. But a new study led by researchers in the University of Maryland School of Public Health and the Johns Hopkins School of Public Health reveals that widespread awareness of Jolie’s story did not translate into increased understanding of breast cancer risk.

The survey of more than 2,500 Americans found that three out of four were aware of Jolie’s story, but fewer than 10 percent of those could correctly answer questions about the BRCA gene mutation that Jolie carries and the typical person’s risk of developing breast cancer. Though very rare, women with harmful mutations in either of two genes, BRCA1 and BRCA2, have a risk of breast cancer that is about five times the normal risk, and a risk of ovarian cancer that is about ten to thirty times normal. The study is published on December 19, 2013 in Genetics in Medicine. 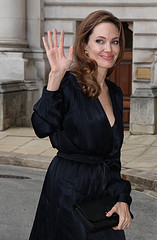 “Ms. Jolie’s health story was prominently featured throughout the media and was a chance to mobilize health communicators and educators to teach about the nuanced issues around genetic testing, risk, and prophylactic surgery,” explained lead author Dina Borzekowski, who is a research professor in UMD’s Department of Behavior and Community Health. “It feels like it was a missed opportunity to educate the public about a complex but rare health situation.”

Among survey respondents who were aware of Jolie’s story, nearly half could recall her estimated risk of breast cancer before the surgery, but fewer than 10 percent of those had the necessary information to interpret the risk of an average woman without a BRCA gene mutation relative to Jolie’s risk. Additionally, exposure to Jolie’s story was associated with greater confusion, rather than clarity, about the relationship between a family history of cancer and increased cancer risk. About half incorrectly thought that a lack of family history of cancer was associated with a lower than average personal risk of cancer, and among respondents who had at least one close relative affected by cancer, those who were aware of Jolie’s story were less likely than those who were unaware of her story to estimate their own cancer risk as higher than average (39 vs. 59 percent).

“Since many more women without a family history develop breast cancer each year than those with, it is important that women don’t feel falsely reassured by a negative family history,” said Dr. Debra Roter, co-author of the study and director of the Center for Genomic Literacy and Communication at the Johns Hopkins Bloomberg School of Public Health.

Breast cancer cases linked to a BRCA gene mutation are extremely rare, and the average woman’s risk of getting breast cancer over her lifetime if she does not have a BRCA mutation is between five and 15 percent.

Other survey findings included that more than half of the women (57 percent) who had heard the story said they would undergo similar surgery if they carried the faulty BRCA gene, and a majority (72 percent) of men and women surveyed felt Ms. Jolie did the right thing by publically announcing her situation.

The study concluded that despite the ability of celebrities to raise awareness of health issues by sharing personal stories, these messages need to be accompanied by a more purposeful communication effort to assist the public in understanding and using the complex diagnostic and treatment information that these stories convey.