Mercury was long thought to be lacking volatile compounds that cause explosive volcanism. That view started to change when the MESSENGER spacecraft returned pictures of pyroclastic deposits — the telltale signature of volcanic explosions. Now more detailed data from MESSENGER shows that volcanoes exploded on Mercury for a substantial portion of the planet’s history. The findings suggest Mercury not only had volatiles but held on to them for longer than scientists had expected.

PROVIDENCE, R.I. [Brown University] — The surface of Mercury crackled with volcanic explosions for extended periods of the planet’s history, according to a new analysis led by researchers at Brown University. The findings are surprising considering Mercury wasn’t supposed to have explosive volcanism in the first place, and they could have implications for understanding how Mercury formed.

On Earth, volcanic explosions like the one that tore the lid off Mount St. Helens happen because our planet’s interior is rich in volatiles — water, carbon dioxide and other compounds with relatively low boiling points. As lava rises from the depths toward the surface, volatiles dissolved within it change phase from liquid to gas, expanding in the process. The pressure of that expansion can cause the crust above to burst like an overinflated balloon.

Mercury, however, was long thought to be bone dry when it comes to volatiles, and without volatiles there can’t be explosive volcanism. But that view started to change in 2008, after NASA’s MESSENGER spacecraft made its first flybys of Mercury. Those glimpses of the surface revealed deposits of pyroclastic ash — the telltale signs of volcanic explosions — peppering the planet’s surface. It was a clue that at some point in its history Mercury’s interior wasn’t as bereft of volatiles as had been assumed.

What wasn’t clear from those initial flybys was the timeframe over which those explosions occurred. Did Mercury’s volatiles escape in a flurry of explosions early in the planet’s history or has Mercury held on to its volatiles over a much longer period? 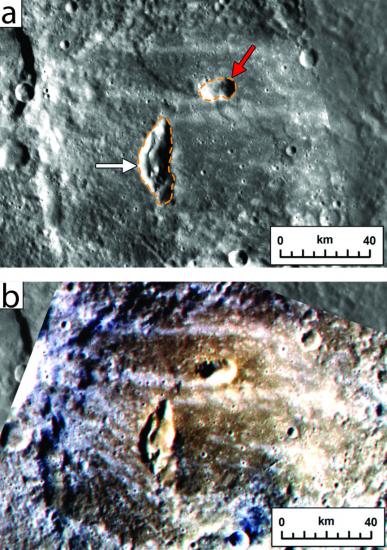 This latest work, available in online early view at the Journal of Geophysical Research: Planets, suggests the latter.

A team of researchers led by Tim Goudge, a graduate student in the Department of Geological Sciences at Brown, looked at 51 pyroclastic sites distributed across Mercury’s surface. They used data from MESSENGER’s cameras and spectrometers collected after the spacecraft entered orbit around Mercury in 2011. Compared with the data from the initial flybys, the orbital data provided a much more detailed view of the deposits and the source vents that spat them out.

The new MESSENGER data revealed that some of the vents have eroded to a much greater degree than others — an indicator that the explosions didn’t happen all at the same time.

“If [the explosions] happened over a brief period and then stopped, you’d expect all the vents to be degraded by approximately the same amount,” Goudge said. “We don’t see that; we see different degradation states. So the eruptions appear to have been taking place over an appreciable period of Mercury’s history.”

But just where that period of explosiveness fits into Mercury’s geological history was another matter. To help figure that out, Goudge and his colleagues took advantage of the fact that most of the sites are located within impact craters. The age of each crater offers an important constraint in the age of the pyroclastic deposit inside it: The deposit has to be younger than its host crater. If the deposit had come first, it would have been obliterated by the impact that formed the crater. So the age of the crater provides an upper limit on how old the pyroclastic deposit can be.

As it happens, there’s an established method for dating craters on Mercury. The rims and walls of craters become eroded and degraded over time, and the extent of that degradation can be used to get an approximate age of the crater.

Using that method, Goudge and his colleagues showed that some pyroclastic deposits are found in relatively young (geologically speaking) craters dated to between 3.5 and 1 billion years old. The finding helps rule out the possibility that all the pyroclastic activity happened shortly after Mercury’s formation around 4.5 billion years ago.

The extent to which Mercury’s volatiles stuck around could shed light on how the planet formed. Despite being the smallest planet in the solar system (since Pluto was demoted from the ranks of the planets), Mercury has an abnormally large iron core. That finding led to speculation the perhaps Mercury was once much larger, but had its outer layers removed — either fried away by the nearby Sun or perhaps blasted away be a huge impact early in the planet’s history. Either of those events, however, would likely have heated the outer parts of Mercury enough to remove volatiles very early in its history.

In light of this study and other data collected by MESSENGER showing traces of the volatiles sulfur, potassium, and sodium on Mercury’s surface, both those scenarios seem increasingly unlikely.

“Together with other results that suggest the Moon may have had more volatiles than previously thought, this research is revolutionizing our thinking about the early history of the planets and satellites,” said Jim Head, professor of geological sciences and a MESSENGER mission co-investigator. “These results define specific targets for future exploration of Mercury by orbiting and landed spacecraft.”

The work was funded by the NASA Discovery Program (Grant Number: NAS5-97271).