Ancient rocks show life could have flourished on Earth 3.2 billion years ago

A spark from a lightning bolt, interstellar dust, or a subsea volcano could have triggered the very first life on Earth.

But what happened next? Life can exist without oxygen, but without plentiful nitrogen to build genes – essential to viruses, bacteria and all other organisms – life on the early Earth would have been scarce.

The ability to use atmospheric nitrogen to support more widespread life was thought to have appeared roughly 2 billion years ago. Now research from the University of Washington looking at some of the planet’s oldest rocks finds evidence that 3.2 billion years ago, life was already pulling nitrogen out of the air and converting it into a form that could support larger communities.

“People always had the idea that the really ancient biosphere was just tenuously clinging on to this inhospitable planet, and it wasn’t until the emergence of nitrogen fixation that suddenly the biosphere become large and robust and diverse,” said co-author Roger Buick, a UW professor of Earth and space sciences. “Our work shows that there was no nitrogen crisis on the early Earth, and therefore it could have supported a fairly large and diverse biosphere.” 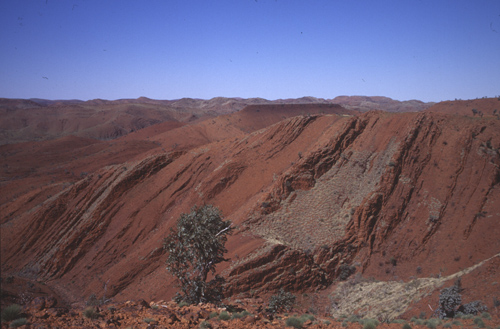 The results were published Feb. 16 in Nature.

The authors analyzed 52 samples ranging in age from 2.75 to 3.2 billion years old, collected in South Africa and northwestern Australia. These are some of the oldest and best-preserved rocks on the planet. The rocks were formed from sediment deposited on continental margins, so are free of chemical irregularities that would occur near a subsea volcano. They also formed before the atmosphere gained oxygen, roughly 2.3 to 2.4 billion years ago, and so preserve chemical clues that have disappeared in modern rocks.

Even the oldest samples, 3.2 billion years old – three-quarters of the way back to the birth of the planet – showed chemical evidence that life was pulling nitrogen out of the air. The ratio of heavier to lighter nitrogen atoms fits the pattern of nitrogen-fixing enzymes contained in single-celled organisms, and does not match any chemical reactions that occur in the absence of life.

“Imagining that this really complicated process is so old, and has operated in the same way for 3.2 billion years, I think is fascinating,” said lead author Eva Stüeken, who did the work as part of her UW doctoral research. “It suggests that these really complicated enzymes apparently formed really early, so maybe it’s not so difficult for these enzymes to evolve.”

Genetic analysis of nitrogen-fixing enzymes have placed their origin at between 1.5 and 2.2 billion years ago.

“This is hard evidence that pushes it back a further billion years,” Buick said.

Fixing nitrogen means breaking a tenacious triple bond that holds nitrogen atoms in pairs in the atmosphere and joining a single nitrogen to a molecule that is easier for living things to use. The chemical signature of the rocks suggests that nitrogen was being broken by an enzyme based on molybdenum, the most common of the three types of nitrogen-fixing enzymes that exist now. Molybdenum is now abundant because oxygen reacts with rocks to wash it into the ocean, but its source on the ancient Earth – before the atmosphere contained oxygen to weather rocks – is more mysterious.

The authors hypothesize that this may be further evidence that some early life may have existed in single-celled layers on land, exhaling small amounts of oxygen that reacted with the rock to release molybdenum to the water.

“We’ll never find any direct evidence of land scum one cell thick, but this might be giving us indirect evidence that the land was inhabited,” Buick said. “Microbes could have crawled out of the ocean and lived in a slime layer on the rocks on land, even before 3.2 billion years ago.”

Future work will look at what else could have limited the growth of life on the early Earth. Stüeken has begun a UW postdoctoral position funded by NASA to look at trace metals such as zinc, copper and cobalt to see if one of them controlled the growth of ancient life.

Other co-authors are Bradley Guy at the University of Johannesburg in South Africa, who provided some samples from gold mines, and UW graduate student Matthew Koehler. The research was funded by NASA, the UW’s Virtual Planetary Laboratory, the Geological Society of America and the Agouron Institute.