Newly recovered fossils confirm that Drepanosaurus, a prehistoric cross between a chameleon and an anteater, was a small reptile with a fearsome finger. The second digit of its forelimb sported a massive claw.

Scientists analyzed 212-million-year-old Drepanosaurus arm fossils that were discovered at the Hayden Quarry in Ghost Ranch, New Mexico. The researchers describe their findings in a paper in the Sept. 29 edition of the journal Current Biology. 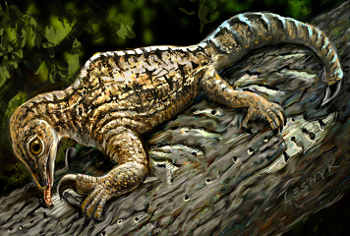 In this illustration set 212 million years ago in what is today New Mexico, a Drepanosaurus rips away tree bark with its massive claw and powerful arm. (Painting by Victor Leshyk)

Drepanosaurus is neither a dinosaur nor a lizard. It is a one- to two-foot long reptile from an extinct group of animals called drepanosaurs, and shares a common ancestry with lizards, crocodiles, and dinosaurs. The only other known Drepanosaurus fossil was a badly crushed skeleton found in northern Italy more than 30 years ago.

“This animal stretches the bounds of what we think can evolve in the limbs of four-footed animals,” said Adam Pritchard, a postdoctoral researcher at Yale and first author of the study. “Ecologically, Drepanosaurus seems to be a sort of chameleon-anteater hybrid, which is really bizarre for the time. It possesses a totally unique forelimb.”

Four-limbed animals with a backbone are called tetrapods. In nearly all tetrapods, the forearm is made up of two, elongate and parallel bones — the radius and the ulna. These bones connect to a series of much shorter, wrist bones at the base of the hand.

Drepanosaurus, however, has radius and ulna bones that are not parallel. Instead, the ulna is a flat, crescent-shaped bone. Also, the two wrist bones that meet the end of the ulna are long rather than short. They are longer than the radius, in fact.

“The bone contacts suggest that the enlarged claw of Drepanosaurus could have been hooked into insect nests,” Pritchard said. “The entire arm could then have been powerfully retracted to tear open the nest. This motion is very similar to the hook-and-pull digging of living anteaters, which also eat insects.”

Drepanosaurus also had grasping feet and a claw-like structure at the tip of its tail. The finding suggests that tetrapods developed specialized, modern ecological roles more than 200 million years ago.

Pritchard is a postdoctoral fellow in the lab of Bhart-Anjan Bhullar in the Department of Geology and Geophysics at Yale. Co-authors of the study were Alan Turner of Stony Brook University, Randall Irmis of the University of Utah, Sterling Nesbitt of Virginia Polytechnic Institute and State University, and Nathan Smith of the Dinosaur Institute at the Natural History Museum of Los Angeles County.

The research was funded by grants from the National Science Foundation. Other funding was provided by the National Geographic Society Committee for Research & Exploration. Fieldwork was conducted with the permission and support of the Ghost Ranch Conference Center.