Washington, D.C.— Life originated as a result of natural processes that exploited early Earth’s raw materials. Scientific models of life’s origins almost always look to minerals for such essential tasks as the synthesis of life’s molecular building blocks or the supply of metabolic energy. But this assumes that the mineral species found on Earth today are much the same as they were during Earth’s first 550 million years—the Hadean Eon—when life emerged. A new analysis of Hadean mineralogy challenges that assumption. It is published in American Journal of Science.

Carnegie’s Robert Hazen compiled a list of every plausible mineral species on the Hadean Earth and concludes that no more than 420 different minerals—about 8 percent of the nearly 5,000 species found on Earth today—would have been present at or near Earth’s surface.

“This is a consequence of the limited ways that minerals might have formed prior to 4 billion years ago,” Hazen explained. “Most of the 420 minerals of the Hadean Eon formed from magma—molten rock that slowly crystallized at or near Earth’s surface—as well as the alteration of those minerals when exposed to hot water.” 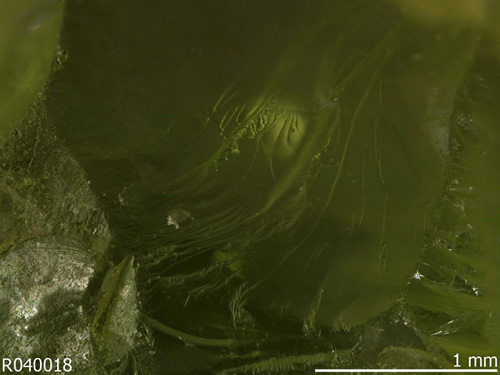 The magnesium silicate forsterite was one of the most abundant minerals in the Hadean Eon, and it played a major role in Earth’s near-surface processes. The green color of this mineral (which is also known as the semi-precious gemstone peridot, the birthstone of August) is caused by small amounts iron. The iron can react with seawater to promote chemical reactions that may have played a role in life’s origins. Photo courtesy of Robert Downs, University of Arizona, Ruff Project.

By contrast, thousands of mineral species known today are the direct result of growth by living organisms, such as shells and bones, as well as life’s chemical byproducts, such as oxygen from photosynthesis. In addition, hundreds of other minerals that incorporate relatively rare elements such as lithium, beryllium, and molybdenum appear to have taken a billion years or more to first appear because it is difficult to concentrate these elements sufficiently to form new minerals. So those slow-forming minerals are also excluded from the time of life’s origins.

“Fortunately for most origin-of-life models, the most commonly invoked minerals were present on early Earth,” Hazen said.

For example, clay minerals—sometimes theorized by chemists to trigger interesting reactions—were certainly available. Sulfide minerals, including reactive iron and nickel varieties, were also widely available to catalyze organic reactions. However, borate and molybdate minerals, which are relatively rare even today, are unlikely to have occurred on the Hadean Earth and call into question origin models that rely on those mineral groups.

Several questions remain unanswered and offer opportunities for further study of the paleomineralogy of the Hadean Eon. For example, the Hadean Eon differs from today in the frequent large impacts of asteroids and comets—thousands of collisions by objects with diameters from a mile up to 100 miles. Such impacts would have caused massive disruption of Earth’s crust, with extensive fracture zones that were filled with hot circulating water. Such hydrothermal areas could have created complex zones with many exotic minerals.

This study also raises the question of how other planets and moons evolved mineralogically. Hazen suggests that Mars today may have progressed only as far as Earth’s Hadean Eon. As such, Mars may be limited to a similar suite of no more than about 400 different mineral species. Thanks to the Curiosity rover, we may soon know if that’s the case.