Ancient Humans Were Mixing it Up

*Anatomically modern humans interbred with more archaic hominin forms even before they migrated out of Africa, a UA-led team of researchers has found.*

It is now widely accepted that anatomically modern humans of the species Homo sapiens originated in Africa and eventually spread throughout the world. Ancient DNA recovered from fossil Neanderthal bones suggests they interbred with more archaic hominin forms once they had left their evolutionary cradle for the cooler climates of Eurasia, but whether they exchanged genetic material with other, now extinct archaic hominin varieties in Africa remained unclear.

In a paper published in the Proceedings of the National Academy of Sciences, or PNAS, a team led by Michael Hammer, an associate professor and research scientist with the UA’s Arizona Research Labs, provides evidence that anatomically modern humans were not so unique that they remained separate. 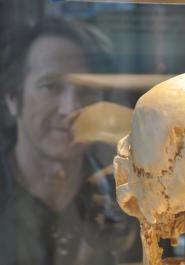 “We found evidence for hybridization between modern humans and archaic forms in Africa. It looks like our lineage has always exchanged genes with their more morphologically diverged neighbors,” said Hammer, who also holds appointments in the UA’s department of ecology and evolutionary biology, the school of anthropology, the BIO5 Institute and the Arizona Cancer Center.

The team reports that contemporary African populations contain a small proportion of genetic material brought in by an archaic population that split from the ancestors of anatomically modern humans about 700,000 years ago.

Hammer added that recent advances in molecular biology have made it possible to extract DNA from fossils tens of thousands of years old and compare it to that of modern counterparts.

However, “We don’t have fossil DNA from Africa to compare with ours,” he said. “Neanderthals lived in colder climates, but the climate in more tropical areas make it very tough for DNA to survive that long, so recovering usable samples from fossil specimens is extremely difficult if not impossible.”

“Our work is different from the research that led to the breakthroughs in Neanderthal genetics,” he explained. “We couldn’t look directly for ancient DNA that is 40,000 years old and make a direct comparison.”

To get past this hindrance, Hammer’s team followed a computational and statistical approach.

“Instead, we looked at DNA from modern humans belonging to African populations and searched for unusual regions in the genome.”

Because nobody knows the DNA sequences of those now extinct archaic forms, Hammer’s team first had to figure out what features of modern DNA might represent fragments that were brought in from archaic forms.

The researchers used simulations to predict what ancient DNA sequences would look like had they survived within the DNA of our own cells.

“You could say we simulated interbreeding and exchange of genetic material in silico,” Hammer said. “We can simulate a model of hybridization between anatomically modern humans and some archaic form. In that sense, we simulate history so that we can see what we would expect the pattern to look like if it did occur.”

According to Hammer, the first signs of anatomically modern features appeared about 200,000 years ago. Non-modern varieties of Homo are thought to have emerged about 300,000 years earlier and have survived until as recently as 30,000 years ago or even later.

First, the team sequenced vast regions of human genomes from samples taken from six different populations living in Africa today and tried to match up their sequences with what they expected those sequences to look like in archaic forms. The researchers focused on non-coding regions of the genome, stretches of DNA that do not contain genes, which serve as the blueprints for proteins.

“Then we asked ourselves what does the general pattern of variation look like in the DNA that we sequenced in those African populations, and we started to look at regions that looked unusual,” Hammer said. “We discovered three different genetic regions fit the criteria for being archaic DNA still present in the genomes of sub-Saharan Africans. Interestingly, this signature was strongest in populations from central Africa.”

The scientists applied several criteria to tag a DNA sequence as archaic. For example, if a DNA sequence differed radically from the ones found in a modern population, it was likely to be ancient in origin. Another telltale sign is how far it extends along a chromosome. If an unusual piece is found to stretch a long portion of a chromosome, it is an indication of being brought into the population relatively recently.

“We are talking about something that happened between 20,000 and 60,000 years ago – not that long ago in the scheme of things,” Hammer said. “If interbreeding occurs, it’s going to bring in a whole chromosome, and over time, recombination events will chop the chromosome down to smaller pieces. And those pieces will now be found as short, unusual fragments. By looking at how long they are we can get an estimate of how far back the interbreeding event happened.”

Hammer said that even though the archaic DNA sequences account for only two or three percent of what is found in modern humans, that doesn’t mean the interbreeding wasn’t more extensive.

“It could be that this represents what’s left of a more extensive archaic genetic content today. Many of the sequences we looked for would be expected to be lost over time. Unless they provide a distinct evolutionary advantage, there is nothing keeping them in the population and they drift out.”

In a next step, Hammer’s team wants to look for ancient DNA regions that conferred some selective advantage to the anatomically modern humans once they acquired them.

“We think there were probably thousands of interbreeding events,” Hammer said. “It happened relatively extensively and regularly.”

“Anatomically modern humans were not so unique that they remained separate,” he added. “They have always exchanged genes with their more morphologically diverged neighbors. This is quite common in nature, and it turns out we’re not so unusual after all.”

The paper, Genetic Evidence for Archaic Admixture in Africa, was co-authored by August Woerner from the UA’s ARL Division of Biotechnology, Fernando Mendez from the UA’s department of ecology and evolutionary biology, Joseph Watkins from the UA’s Mathematics Department and Jeffrey Wall from the Institute for Human Genetics at the University of California San Francisco.