A fossil creature buried in an “invertebrate version of Pompeii” more than half a billion years ago reveals the first-known cardiovascular system in exquisitely preserved detail.

An international team of researchers from the University of Arizona, China and the United Kingdom has discovered the earliest known cardiovascular system, and the first to clearly show a sophisticated system complete with heart and blood vessels, in fossilized remains of an extinct marine creature that lived over half a billion years ago. The finding sheds new light on the evolution of body organization in the animal kingdom and shows that even the earliest creatures had internal organizational systems that strongly resemble those found in their modern descendants.

“This is the first preserved vascular system that we know of,” said Nicholas Strausfeld, a Regents’ Professor of Neuroscience at the University of Arizona’s Department of Neuroscience, who helped analyze the find.

This image shows the dorsal view of Fuxianhuia protensa. The three-inch-long fossil was found in sediments dating from the Cambrian Period 520 million years ago in what today is the Yunnan province in China. Parts of the gut are visible as dark stains along the animal’s midline. (Photo credit: Xiaoya Ma)

Being one of the world’s foremost experts in arthropod morphology and neuroanatomy, Strausfeld is no stranger to finding meaningful and unexpected answers to long-standing mysteries in the remains of creatures that went extinct so long ago scientists still argue over where to place them in the evolutionary tree.

The 3-inch-long fossil was entombed in fine dustlike particles – now preserved as fine-grain mudstone ­­– during the Cambrian Period 520 million years ago in what today is the Yunnan province in China. Found by co-author Peiyun Cong near Kunming, it belongs to the species Fuxianhuia protensa, an extinct lineage of arthropods combining advanced internal anatomy with a primitive body plan.

“Fuxianhuia is relatively abundant, but only extremely few specimens provide evidence of even a small part of an organ system, not even to speak of an entire organ system,” said Strausfeld, who directs the UA Center for Insect Science. “The animal looks simple, but its internal organization is quite elaborate. For example, the brain received many arteries, a pattern that appears very much like a modern crustacean.”

In fact, Strausfeld pointed out, Fuxianhuia’s vascular system is more complex than what is found in many modern crustaceans.

“It appears to be the ground pattern from which others have evolved,” he said. “Different groups of crustaceans have vascular systems that have evolved into a variety of arrangements but they all refer back to what we see in Fuxianhuia.”

“Over the course of evolution, certain segments of the animals’ body became specialized for certain things, while others became less important and, correspondingly, certain parts of the vascular system became less elaborate,” Strausfeld said.

Strausfeld helped identify the oldest known fossilized brain in a different specimen of the same fossil species, as well as the first evidence of a completely preserved nervous system similar to that of a modern chelicerates, such as a horseshoe crab or a scorpion.

“This is another remarkable example of the preservation of an organ system that nobody would have thought could become fossilized,” he said. 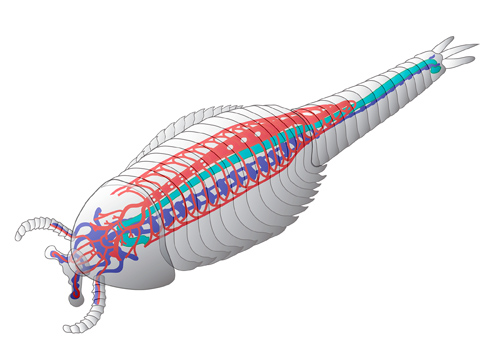 This image shows a schematic reconstruction of the animal, outlining the cardiovascular system in red, the brain and central nervous system in blue and the gut in green. (Image credit: Nicholas Strausfeld)

In addition to the exquisitely preserved heart and blood vessels, outlined as traces of carbon embedded in the surrounding mineralized remains of the fossil, it also features the eyes, antennae and external morphology of the animal.

Using a clever imaging technique that selectively reveals different structures in the fossil based on their chemical composition, collaborator Xiaoya Ma at London’s Natural History Museum was able to identify the heart, which extended along the main part of the body, and its many lateral arteries corresponding to each segment. Its arteries were composed of carbon-rich deposits and gave rise to long channels, which presumably took blood to limbs and other organs.

“With that, we can now start speculating about behavior,” Strausfeld explained. “Because of well-supplied blood vessels to its brain, we can assume this was a very active animal capable of making many different behavioral choices.”

Researchers can only speculate as to why the chemical reactions that occurred during the process of fossilization allowed for this unusual and rare kind of preservation, and as to why only select tissues were preserved between a few rare and different specimen.

“Presumably the conditions had to be just right,” Strausfeld said. “We believe that these animals were preserved because they were entombed quickly under very fine-grained deposits during some kind of catastrophic event, and were then permeated by certain chemicals in the water while they were squashed flat. It is an invertebrate version of Pompeii.”

Possibly, only one in thousands of fossils might have such a well-preserved organ system, Strausfeld said.

At the time Fuxianhuia crawled on the seafloor or swam through water, life had not yet conquered land.

“Terrible sand storms must have occurred because there were probably no plants that could hold the soils,” Strausfeld said. “The habitats of these creatures must have been inundated with massive fallouts from huge storms.”

Tsunamis may also be the cause for the exceptional preservation.

“As the water withdraws, animals on the seafloor dry,” Strausfeld said. “When the water rushed back in, they might become inundated with mud. Under normal circumstances, when animals die and are left to rot on the seafloor, they become unrecognizable. What happened to provide the kinds of fossils we are seeing must have been very different.”

The article, “An exceptionally preserved arthropod cardiovascular system from the early Cambrian,” is published in Nature Communications. Strausfeld’s co-authors are Xiaoya Ma, Peiyun Cong and Xianguang Hou of the Yunnan Key Laboratory for Palaeobiology at Yunnan University in Kunming, China, and Gregory D. Edgecombe of the Department of Earth Sciences at the The Natural History Museum in London.