AI’s transformative potential and what’s next …

Artificial intelligence holds the key to a new era of innovation, one where computers begin to work intelligently on our behalf rather than under our command. It’s an era where technology will become more intuitive, more conversational, more intelligent, will enable businesses to better know and serve their customers in ways previously unimaginable, and ultimately help solve some of the planet’s biggest challenges. 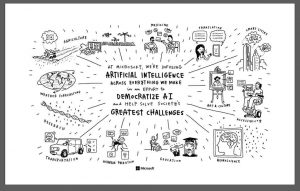 This new era of AI is driven by the combination of almost limitless computing power in the cloud, the digitization of our world, and breakthroughs in how computers can use this information to learn and reason much like people do. What some are calling the Fourth Industrial Revolution is being accelerated by these advancements in AI, and this means that all companies are becoming digital companies — or will soon be.

While there has been an AI renaissance recently, if you think of it in terms of other eras of great advancement, we are in the mainframe stage, which is to say, early days of what will someday be pervasive and powerful technology. We need to evolve from mainframe, to PC, to mobile, and make AI accessible to all, to both use and build on this technology because its potential is enormous.

AI’s potential goes far beyond computers that can play and win games. This technology will transform industries, from automotive to manufacturing, healthcare to education, agriculture, research and the public sector.

Cities are getting smarter; cars can recognize and make decisions about the objects around them; an online support agent can hold a conversation with a human and successfully resolve issues; a manufacturing system can reason over vast quantities of historical data and accurately predict the future; a medical imaging system can assist a clinician to spot tumors more accurately. All because of the power of AI.

And while there are real and important concerns about the role of this technology, Microsoft’s approach to AI is one that doesn’t replace, but rather augments, human capabilities and ultimately delivers more of the most precious commodity in life — time.

Microsoft’s focus is on Democratizing AI. That means we’re putting AI tools in the hands of businesses, public sector organizations and developers to build their own intelligence capability. Ultimately, we believe that everyone can and should benefit from the promise of artificial intelligence.

AI for every person and every organization

We are committed to democratizing AI for customers — both by infusing AI into our products at scale such as Office 365 and Dynamics 365 as well as building a platform of intelligent services in the cloud, and using agents or bots to harness the power of AI to help people get things done.

Land O’ Lakes, for example, is using MyAnalytics — a capability in Office 365 that provides insights on how employees spend time at work and who they spend it with. Details about time spent in meetings, email, focus hours and after hours let employees know exactly where their minutes are going. Think of it as a fitness tracker for your workday.

Customers such as Volvo, Nissan, BMW and Harman Kardon are already doing amazing things with this technology, building on our Cortana platform to create solutions in the car, in home automation, productivity and device control.

AI is also enabling magical things with massive global impact like the ability to translate between spoken and written languages instantaneously.

Microsoft Translator is a free, cross-platform tool for simultaneously translating between groups speaking multiple languages in-person, in real-time, connecting people and overcoming barriers. It connects up to 100 people, speaking across up to nine languages and working in over 50 typed languages. In London, The Children’s Society uses Microsoft Translator to help refugees and those seeking asylum overcome language barriers.

As we build intelligence into everything, whether it’s your keyboard, your camera or business applications, we are essentially teaching computers to see, to hear, to predict, learn and take action.

In Skype, for example, that means new calling capabilities with talking bots, opening a whole new field for customer interaction.

Ultimately, agents like Cortana will take on an emotional aspect and not only have IQ but also EQ, and that’s the idea behind Microsoft’s work with chatbots. The next chapter in this evolution is Zo.

Built upon the technology stack that powers XiaoIce and Rinna — successful Microsoft AI chatbots in China and Japan — Zo learns from human interactions to respond emotionally and intelligently. You can engage with her on Kik today. In the future, Zo will be available on other social and conversational channels such as Skype and Facebook Messenger.

As we pursue our ambition to democratize AI, we aim to take these capabilities and make them available to every developer as a set of APIs, and in doing so build a platform for others to build intelligence into their products and services.

Collectively, we call these services Cortana Intelligence Suite — a set of services that provide on-demand access to AI capabilities. These tools are being used in a variety of industries — including healthcare, personalized medicine and agriculture — and with customers like UBER and McDonald’s.

Some, like elevator company ThyssenKrupp, are using predictive intelligence to fundamentally change the way they do business. Rolls-Royce is using Cortana Intelligence Suite to uncover data insights that allow the manufacturer to increase aircraft availability while reducing engine maintenance costs.

Meanwhile, more than 77,000 developers have registered bots using Microsoft’s Bot Framework, and a broad range of customers and organizations such as Bank of Kochi, Rockwell Automation and the Australian Department of Human Services are leveraging this technology to transform their businesses across channels such as Slack, Facebook Messenger, Office 365, text/sms, Skype and Kik.

Finally, to build the foundation necessary to power this transformative technology, Microsoft is driving infrastructure innovation from the silicon up to the cloud down as we build the world’s first AI supercomputer, atop Microsoft Azure.

A strong and growing commitment

Microsoft has a rich history in the AI space and has been helping contribute to — and lead — the advancement of AI for 25 years, beginning in the early 1990s with the creation of Microsoft Research and investment in the belief that speech would be the next frontier in the effort to create more natural computing.

Over nearly three decades, we’ve developed technology that can recognize words and pictures more accurately than people can. This technology is driving advancements in real-time translation, and ultimately the ability for machines on a factory floor to distinguish between a fabricated part and a human arm, or an autonomous vehicle to recognize the difference between a bouncing ball and a waddling toddler.

We continue to grow our expertise. Last fall, Microsoft announced the formation of the Microsoft Artificial Intelligence and Research Group — bringing together more than 5,000 employees around the globe, spanning research and engineering. We’ve also recently formed a new partnership with OpenAI, created a Microsoft Ventures fund focused on AI, and announced that one of the world’s foremost experts in deep learning, Yoshua Bengio, will join Microsoft as a part of the acquisition of Maluuba, a Montreal, Canada-based company with one of the most expansive research labs for natural language understanding. Microsoft this week also announced its intention to grow Maluuba as well as invest in an additional $7 million in AI research in Canada.

A future with AI

We recognize the concern AI raises in replacing jobs. As in times past, we’re at risk of leaving people behind in the explosive growth driven by technology. Collectively, we need a plan to resume productivity growth that is equally intense — with a focus on education, innovation and encouraging use of technology to create new jobs.

The question we collectively need to ask is what are the design principles we need to follow to augment human capability and drive growth? We believe that ethics and design go hand in hand, and published our thoughts on a set of core AI design principles to ensure that the technology is built with intelligence that is transparent and secure, and sets the highest bar for protecting privacy, while also being inclusive and respectful to all.

At our core, we’re technology optimists. We also fundamentally believe in the power of people. For it is human ingenuity and human passion that will harness this new technology and innovate to transform our world in ways previously unimaginable.