In these recent sweltering days of summer, air conditioning might seem like your best friend. But those refreshingly cold gusts of air could also be delivering microbes around your house or office – and possibly making you sick.

With a grant from the Sloan Foundation, the lab of Prof. Jordan Peccia in Chemical & Environmental Engineering is taking a good look into the inner workings of air conditioning units and the kinds of bacteria and fungi they foster. The idea study was prompted in part by research that has shown a high proportion of illness among people who work and live in buildings with air conditioning. Reported symptoms are most often minor ones, such as the tightening of the chest and dry coughs, but exposure to air conditioners has also been linked to Legionnaire’s disease. 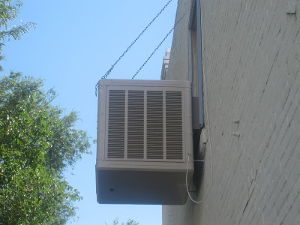 In the last few decades, the rise of the air conditioner has been swift. In 1965, AC units were in only about 10% of homes in the U.S. Today, approximately 85% of homes and 95% of office buildings have them. The presence of an air conditioning system in office buildings has been associated with a 30% to 200% increase in respiratory and other health systems, compared to naturally ventilated offices. But our knowledge of the microbes that grow on AC coils hasn’t kept pace. Prior studies have identified the potential for microbial growth on AC coils, and their unhealthful effects on humans. However, there’s still much to learn about the microbiology in AC units.

“We don’t know why or how, but prior works have shown that when you take the microbes away from the AC system’s coils by UV light, people feel better,” Peccia said.

Researchers from the University of Toronto and the California Department of Public Health are also working on the two-year study, which entails taking microbe samples from numerous air conditioner units in the Northeastern U.S. (including buildings on Yale’s West Campus) and Sacramento, CA. Using genetic methods, they’ll take an inventory of all the microorganisms they find in the units. They will determine which factors (outdoor air temperature or humidity, for example, or AC coil temperature, etc.) influence the growth of bacteria and fungi in AC units. Then they’ll measure the rate at which these microorganisms are distributed into the air.

“We’re going to dig through the coils of these big systems to determine what grows there – what kind of fungi, what kind of bacteria are growing on these coils.” he said. “When you think about it, air conditioning coils are wet, cold places. Wherever water exists in a building, we usually find bacterial and fungal growth. There’s stuff in there and that may become distributed throughout the building.”

Peccia believes the air conditioning units are creating unique environments for microbes. “The cold, alternating wet and dry conditions in AC units form a unique environment, and likely promote the growth of a narrow range of microbes,” he said. “Once we identify these unique microbes, we’re going to start looking for them in settled dust and air samples throughout the building to try to see how much air conditioning really influences the microbial exposure in a building.