Last fall, the University of Delaware’s Carl Schmidt took a trip to Uganda with a team of researchers from Iowa State University and North Carolina State University to get genetic samples from African chickens. The goal was to compare and contrast their genes to one another, and also to American broiler chickens, to gauge how the two species’ genetic makeup helps them cope with heat stress, as well as susceptibility and resistance to different diseases.

The trip was part of a five-year, $4.7 million National Institute of Food and Agriculture (NIFA) climate change grant for a project titled “Adapting Chicken Production to Climate Change Through Breeding.”

Schmidt explained that the objective of the trip was “to try to identify genes that may be helping these birds survive on different diets, in a different climate, and facing different disease challenges.” 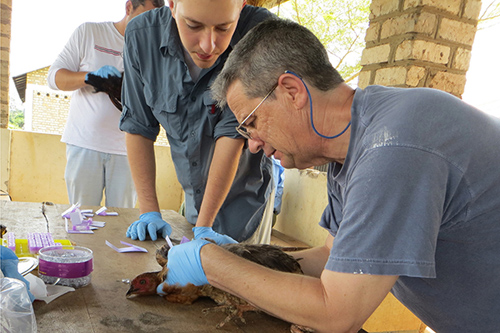 Schmidt, associate professor in the Department of Animal and Food Sciences in UD’s College of Agriculture and Natural Resources (CANR), said that the group gathered more than 100 samples of African chicken DNA from “back yard flocks” of chickens from three cities from different regions of the country: Buwama, Wobulenzi and Kamuli.

Aiding the group in the research being done in Uganda was the organization Volunteer Efforts for Development Concerns (VEDCO), which Schmidt called invaluable as it supplied the researchers with lodging during their time in Kamuli. The group also collaborated with the International Livestock Research Institute (ILRI), which gave them access to samples ILRI had collected from chickens in Kenya.

Now that the researchers have the samples from Africa, researchers at North Carolina State are processing the DNA. Once the DNA is processed, Schmidt will work at the Delaware Biotechnology Institute to handle the sequencing of the genome and the bioinformatics. 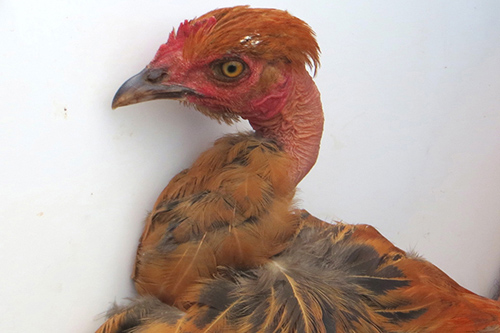 Another difference between the two birds is that whereas American chickens raised in production facilities are relatively sheltered from the elements and from disease, African chickens are pretty much on their own. Schmidt explained that the African chickens are “exposed to the environment — they usually have a small building that they can go into, sometimes they even just go into the homes, but for the most part, they have to fend for themselves.”

Schmidt added that the African chickens also have to deal with predators, theft and “then of course they are also exposed to more disease agents than certainly the birds that are in production facilities here. And the thought is that they’ve been in essence selected to deal with these challenges.” 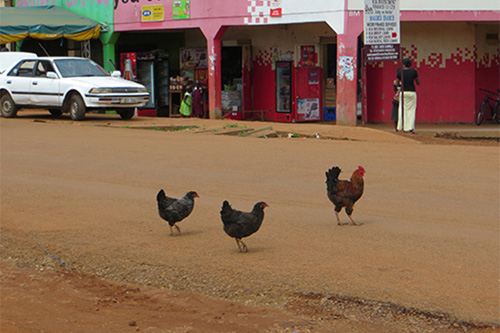 The group didn’t only get samples from traditional African chickens, however, as Schmidt explained that they also ran into a line of chickens imported from India and they wanted to examine the genome of those chickens, as well.

When it comes to size, Schmidt explained that African chickens are smaller than the American broiler chickens one would find in a production facility or at a grocery store. One reason for this is that whereas the production facility chicken is raised to be eaten, the African chicken is kept alive so it can continuously provide eggs as a food source.

Now that the group has collected samples from American and African chickens, Schmidt is hopeful that he will be able to head to Brazil in the summer — as part of a joint agreement between CANR and the University Federal de Lavras — to collect samples of chicken DNA from South America.

“What we’d like to do is get a couple of different geographic locations,” said Schmidt. “And the interesting thing to me is, Uganda kind of straddles the equator and Brazil isn’t quite straddling the equator but it’s a little more similar to Uganda than it is to the United States, so you can kind of see if there are any similarities.”

Schmidt also said that once he gets samples from Brazil, he would be interested in collecting samples from other locations, as well. “One of the things I’d love to do is go to Central America.”

Researchers and students who went on the trip and are involved in the grant from Iowa State include Max Rothschild, the Curtiss Distinguished Professor in Agriculture and director of the Center for Integrated Animal Genomics, and Angelica Bjorkquist and Damarius Fleming, both graduate students.

Researchers and students who went on the trip and are involved in the grant from North Carolina State include Chris Ashwell, associate professor of poultry genomics, nutrition, immunology and physiology, and Alex Zavelo, a graduate student.