For Sue Rosser, the obstacles women in the STEM disciplines face today may be less obvious than they were 40 years ago, but they’re as real as ever.

Rosser, the first woman to serve as provost and vice president for academic affairs at San Francisco State University, presented “Breaking into the Lab: Engineering Progress for Women in Science,” on Nov. 12, at the Knapp Center for Biomedical Discovery. Her talk outlined barriers to women’s advancement in scientific fields, and offered advice for women and academic mentors to avoid discrimination. The event, which is part of the annual lecture series, “How to Advance Women in Science and Engineering,” is a collaboration between the Center for the Study of Gender and Sexuality and the Office of the Provost at the University of Chicago. Rosser’s talk is the second annual colloquium on how to support and advance women in the STEM fields. 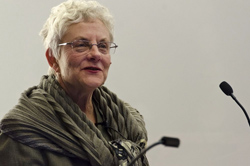 Sue Rosser, the first woman to serve as provost and vice president for academic affairs at San Francisco State University, presented “Breaking into the Lab: Engineering Progress for Women in Science,” on Nov. 12, at the Knapp Center for Biomedical Discovery. Photo by Megan E. Doherty

Rosser’s own experiences as a student and a post-doc gave her a first-hand view of the kind of discrimination women scientists and engineers are up against. In addition to having to withstand sexual harassment, Rosser has written that an adviser once told her she should get an abortion, since her pregnancy would interfere with the research agenda.

For her latest research, Rosser interviewed 450 women scientists and engineers about their experiences with bias—including unintentional bias—at different levels of their careers.

The women reported encountering one or more problems navigating others’ assumptions about their capacity to focus on their work, if they had a family, and how they managed dual career situations. They also encountered a lack of adequate mentoring, and experienced the fear of becoming trapped in lesser positions that constrained advancement in their field.

One woman recounted being passed over for an early promotion to full professor by male colleagues who resented her nomination, voting instead for another male colleague. Another spoke about struggling to progress beyond a post-doc position, managing someone else’s research while trying to find an appropriate family-friendly tenure-track position.

The number of PhDs in STEM fields awarded to women is low overall, bottoming out at 22 percent in computer science and only 21.6 percent in engineering.

Rosser has offered women scientists and their mentors some practical guidance for avoiding discrimination. She suggests that women scientists and engineers check the circumstances of their present positions against their long-term career goals and examine how they’re contributing to those goals. While interviewing for positions, Rosser advises women to look for evidence of women- and family-friendly policies across the institution as a whole, as well as the particular lab or department. Women also should realize that while having a supportive mentor is highly important, it is not necessarily more vital than having a supportive spouse or partner.

Well-meaning mentors need to remember that steering women students or postdocs toward less challenging research topics does not “help” them, Rosser says, and while it is appropriate to tell women about parental leave and other family-friendly policies that information should be provided to men, too. Rosser also reminds faculty never to suggest to a female student or faculty member that she should not have a child—whether in general, or to avoid an “inconvenient” time.

Rosser, who has written more than 130 journal articles and 13 books on women’s health and how gender relations structure the STEM disciplines, is sometimes asked why she bothers studying this at all.

Recalling how, in the past, signs of cardiac distress that women presented in emergency rooms often went unrecognized, Rosser pointed out that the studies had all been normed against a white male population.

“I study it because it can be a matter of life and death,” Rosser concluded.