A Telescope at the Bottom of the World

Alone in a wilderness of snow and ice, 600 miles from the Earth’s South Pole, a solitary telescope watches the stars, searching for the origins of the colorful nebulae in which stars are born.

The brilliantly colored, sweeping nebulae featured on magazine covers and posters lining museum exhibits are the birthplaces and cradles of the stars in our galaxy.

Out of the blackness of space and swirling gasses and debris, these nebulae take form, coalescing into columns and structures that remind us of Earthly shapes: here a horsehead, there a dragon.

But how do so-called star-forming nebulae themselves form? It’s is a question little understood and much debated by astronomers, and it’s the topic of resaerch by the University of Arizona’s Craig Kulesa and Chris Walker. 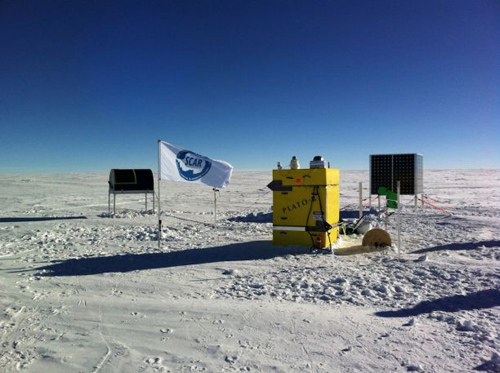 An oddity on a barren snowy plateau, an astronomical observatory watches the skies. From left, the mailbox-like HEAT telescope, the yellow PLATO-R instrument module with cameras and antennas on the rooftop and a cube of solar panels to power the observatory in the summer. (Photo by: Craig Kulesa)

Their quest takes them to one of the most remote and coldest locations on Earth: a barren snow-covered plateau 600 miles from the nearest human settlement, where a little telescope on a tabletop in an Antarctic ice field on the Southern end of the Earth may give them the answer.

“We see all these clouds of dust and gas, but no one’s ever seen one form. They’re just there. Where did they come from? And what happens to them?” Kulesa asked. “Every star in the sky, including our sun, was formed in these clouds.” 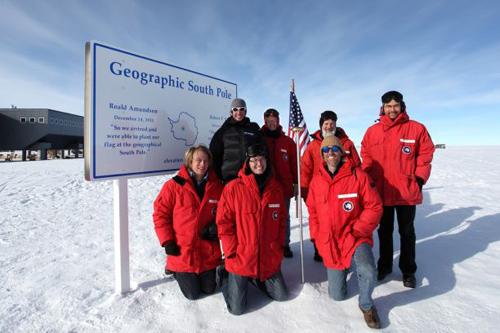 The joint U.S.-Australia team visited the telescope in January, pausing briefly to enjoy the comparatively warm -20 degree Fahrenheit temperatures at the geographic South Pole before flying onward to Ridge A. (Photo by: Geoff Sims)

Stars spend their lives fusing light elements such as hydrogen into heavier elements such as helium, carbon, nitrogen and oxygen – elements needed for life. At the end of their lives, stars return much of that enriched material back into interstellar space, where it eventually becomes new clouds and fuels the next generation of stars.

Star-forming nebulae such as Orion and Horsehead contain mostly molecular hydrogen, which is very difficult to observe in cold interstellar clouds.

“So scientists use light emitted by carbon monoxide molecules instead, as a way of figuring out where these molecular clouds are,” Kulesa said.  “We want to actually see the clouds in the process of being formed. We want to see their building blocks,” Kulesa said. “So instead of looking at carbon in molecular form, we’re going to build radio receivers that will show us carbon in its atomic and ionized forms.”

Carbon atoms and ions that have not yet bound to any other atoms to form molecules, such as carbon monoxide, likely represent the early stages before formation of a dark nebular cloud, Kulesa said. 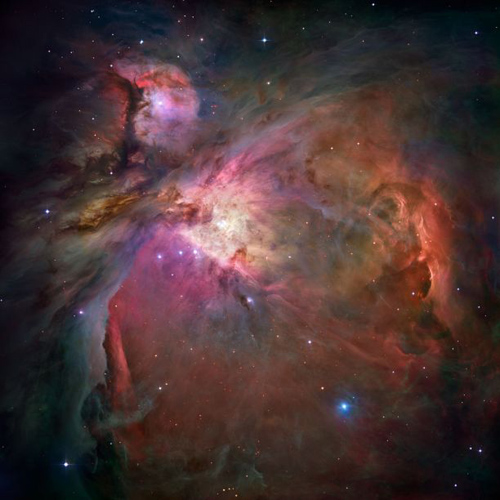 The HEAT telescope observes star-forming molecular clouds such as the Orion nebula, which to some appears as the shape of a winged dragon in flight. Scientists know little about the lifecycle of these molecular clouds. (Image credit: NASA)

Kulesa’s tiny telescope is the first ever with radio receivers tuned to such a high frequency that they are able to detect atomic and ionized carbon in space, sited at a unique place on Earth where these observations can be done routinely.

“No one could see this until now,” Kulesa said. “It turns out that even a telescope the size of a table can do stuff no one’s ever done before.”

With a touch of irony, Kulesa and his teammates dubbed their telescope, which functions at -40 degrees Fahrenheit and colder, HEAT: the High-Elevation-Antarctic-Terahertz telescope. The tabletop scope sits on a platform, shielded from the elements by a large blue cover that looks rather like a mailbox.

“The telescope looks like the farthest outreach of the U.S. postal service,” Kulesa joked, gazing fondly upon a photo of the observatory setup. “We visit it once a year. We’re out in the deep field for a week getting it ready to go for another year, and when we wave goodbye, no human will see it again until the next year. It has to run all by itself.” 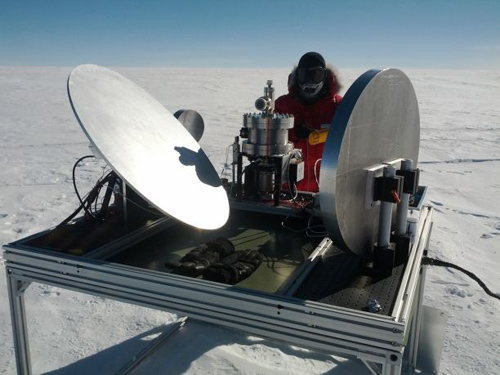 This is a much easier problem to address, thanks to an international collaboration with researchers Michael Ashley and John Storey at the University of New South Wales in Australia, who designed and constructed the Plateau Observatory, or PLATO, which provides HEAT with power and communications.

“It’s a very green experiment,” Kulesa said. “Right now, we’re operating totally off of solar power.” The entire HEAT telescope, including a cryocooler that chills the terahertz detectors to a scant 50 degrees above absolute zero, sips only 160 watts of power.

With batteries charged by solar panels in summer, diesel generators in winter, and using satellite modems for communications controlled by a computer using the same type of processor as an iPhone, the telescope must operate in frozen solitude for an entire year, despite winter temperatures that will fall below -100 degrees Fahrenheit.

“Choosing embedded mobile phone technology for computers turned out to be the right thing because it takes less power; it’s a lot simpler, smaller and lighter,” Kulesa said. “It’s exactly what you need to be able to run an experiment like this.”

Kulesa and his team communicate with the telescope remotely via satellite, sending it new orders and instructions throughout the year, and downloading new data. They also keep a watchful eye on their experiment through a webcam, which sends image updates from roughly 9,000 miles away roughly every hour. 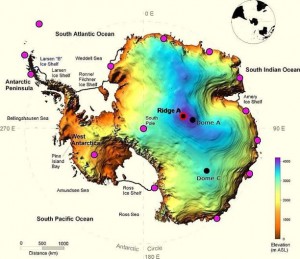 The telescope, ironically dubbed HEAT, keeps a silent year-long vigil atop Ridge A, a high plateau in the center of Antarctica. It’s one of the driest, coldest and calmest places on Earth, ideal for astronomical observations. (Image courtesy of Craig Kulesa) (Click image to enlarge)

Even the smallest amount of water vapor in Earth’s atmosphere absorbs terahertz-frequency light from space before it reaches a telescope on Earth.

“If you take all the water molecules above your head and distill them into a liquid ocean, how deep would that ocean be?” Kulesa asked. From Tucson, Kulesa said, it’s about 5-10 millimeters deep in winter and up to 40 millimeters deep during monsoon season in summer. At the telescope site in Antarctica, a place called Ridge A, atmospheric water vapor is frequently one-tenth of a millimeter or less.

“The summit of the Antarctic plateau is essentially a desert like Arizona, but much colder, higher and drier. The exceptional dryness allows us to perform difficult observations routinely that can’t be done anywhere else on Earth.”

Once a year, the team visits the telescope to replace parts and make adjustments or repairs. Working in -40 degree Fahrenheit summer weather at a pressure altitude of 15,000 feet is not exactly a walk in the park, Kulesa said.

“No matter how you try to avoid it, sometimes you have to work on something that has small parts, but at the same time, you’re also wearing giant insulated gloves,” Kulesa said. “So you have to alternate working on something for about 15 seconds with gloves off, then put the gloves back on and try to warm up,” he said. At Ridge A, a laptop computer typically stops working within 10 minutes of being exposed to the elements.

Despite the difficulties of experimental setup, Kulesa said: “The Ridge A site was selected from satellite measurements that said it would be essentially the best place to put an astronomical observatory on the entire planet. And it appears to be holding true: It’s the driest, coldest and one of the highest and calmest places on Earth. It’s about as close to space-like conditions as you can get and still have your feet on the ground.”

Close to space is what you need if you’re trying to understand the origins of the interstellar machinery that makes the elements of the universe.

“This life cycle of matter in our galaxy is really our own story,” Kulesa said. Stars make all the elements we are made out of, he said: “This cycle sculpts every star, every galaxy in the universe, and we owe our human existence to it. So it’s worth trying to figure out how it works.”