A Tale of (More Than) Two Butterflies

Flitting among the cool slopes of the Appalachian Mountains is a tiger swallowtail butterfly that evolved when two other species of swallowtails hybridized long ago.

It’s a rarity in the animal world, biologists have found.

The Appalachian tiger swallowtail rarely reproduces with its parental species and is a unique mixture of the two in both its outward traits and inward genetic makeup.

The research, published today in the journal PLoS Genetics, is funded by the National Science Foundation (NSF) and the National Institutes of Health. 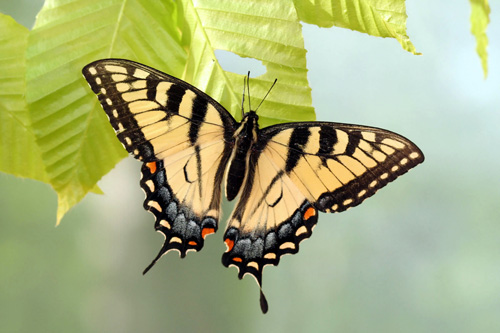 “But we are just beginning to understand the process,” says Scheiner. “These researchers made use of an unusual hybrid to unlock knowledge of the genetic basis of species formation.”

How new species form is one of the central questions in evolutionary biology, says biologist Krushnamegh Kunte of Harvard University, lead author of the paper.

“Hybrid speciation is more common in plants, but there are very few cases in animals,” says Kunte. “This study may create the fullest picture we have to date of hybrid speciation occurring in an animal.”

“This is a remarkable demonstration of how hybridization can create populations with a new combination of life history and morphological traits, allowing colonization of novel environments by a ‘mosaic genome,'” says biologist Larry Gilbert of the University of Texas at Austin, a co-author of the paper.

“Importantly,” he says, “it demonstrates one way that new species can form.” 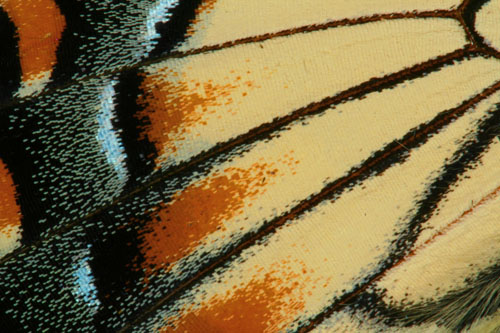 These large insects are generally recognized by yellow wings with black stripes and small “tails” on their hind wings.

They are either striped–yellow and black–or almost entirely black, the latter mimicking a poisonous butterfly called the Pipevine swallowtail, Battus philenor.

Canadian tigers are only striped yellow and black, and found in cooler habitats at higher latitudes and elevations.

The Appalachian tiger exhibits a mix of those traits. 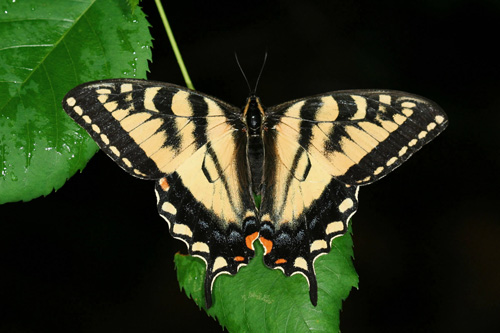 It shares an affinity for cooler habitats with the Canadian tiger, while sharing the ability to mimic the black Pipevine swallowtail with the Eastern tiger.

Digging into the butterflies’ genomes, the scientists found that the Appalachian tiger inherited genes associated with cold habitats from males of the Canadian tiger, and inherited a gene for mimicry from Eastern tiger females.

They also found that the Appalachian tiger’s genome has become distinct from the genomes of its two parental species, even though the butterflies come into contact with each other in the wild.

“Hybrid speciation is a controversial phenomenon, and this is especially true in animals, where clear-cut examples are exceedingly rare,” says Marcus Kronforst of Harvard University, also a co-author of the paper.

The conventional view of speciation is that one species splits into two over time. With time, the species become more and more reproductively isolated from each other.

In the case of hybrid speciation, new species are formed when two species interbreed to create viable hybrids that then evolve on their own.

It can occur when two young species haven’t yet evolved over a long enough period to be completely reproductively isolated.

Kunte says this is probably the case with these tiger swallowtails.

“That’s not a very long time,” says Kunte, “but still we found that the Appalachian tiger has been isolated long enough to have a different appearance and genetic makeup than its parent species.”

The Eastern tiger has more blue on the hind wing and a spotted yellow band on its fore wing underside compared with a solid broad band on the Appalachian tiger.

“Once you train your eyes to tell them apart,” says Kunte, “they are relatively easy to distinguish.”

Other co-authors include Tom Juenger at the University of Texas at Austin.