The shampoo you washed your hair with this morning. The balloons for the party. Refrigerators and sunglasses, medicine and mosquito repellent, guitar strings and fishing lures. These — and thousands of other products we use every day  — contain chemicals made from petroleum. But researchers at the University of Delaware can now offer manufacturers a much sweeter alternative to this fossil fuel.

A UD research team has invented a more efficient process for extracting the sugars from wood chips, corn cobs and other organic waste from forests and farms. This biorenewable feedstock could serve as a cheaper, sustainable substitute for the petroleum used in manufacturing tons upon tons of consumer goods annually — goods that consumers want to be greener. More than half of consumers in the U.S. are willing to pay more for environmentally friendly products, according to GfK MRI’s Survey of the American Consumer, reported earlier this year. 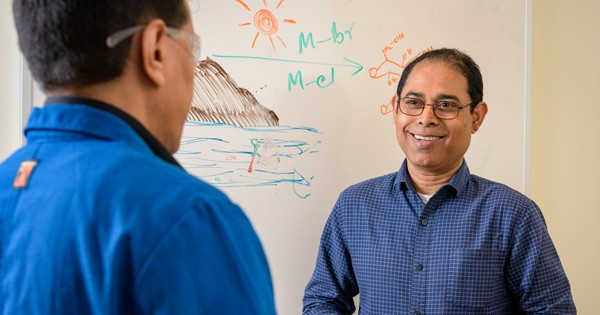 A research team led by Basudeb Saha (above right) at UD’s Catalysis Center for Energy Innovation, a DOE Energy Frontier Research Center, has invented a new process that could make forest and farm waste a cheaper, sustainable alternative to the petroleum used in manufacturing thousands of products. Photo by Evan Krape

“To make greener chemicals and fuel, we’re working with plant material, but we don’t want to compete with its food value,” Saha said. “So instead of taking corn and extracting its sugars to make ethanol, we’re making use of the stalks and cobs left over after the corn is harvested, as well as other kinds of waste like wood chips and rice hulls.”

Although the past decade has seen a shift toward using such waste, referred to as lignocellulosic biomass, to create chemicals for producing biodegradable plastics, pharmaceuticals, cosmetics and biofuels, biorefineries have struggled with finding steady supplies and with high processing costs.

Although wood chips and corn cobs may sound like simple, inexpensive materials, they are hard to break down chemically.

“The lignin that makes their cell walls so tough and sturdy acts like superglue, holding tightly to the sugars,” Saha said. 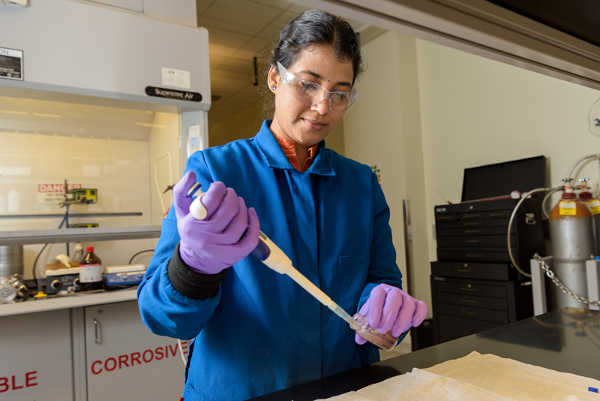 Sunitha Sadula, a postdoctoral researcher at UD’s Catalysis Center for Energy Innovation, a DOE Energy Frontier Research Center, works in the lab to extract sugars from wood chips, corn cobs and other forest and farm waste. Photo by Evan Krape

Industry currently separates out the sugars from the lignin through a two-step process using harsh chemicals and reaction conditions in the first step, and an expensive enzyme in the second step. This process makes the resulting sugars expensive and the end products, though renewable, less competitive than those produced with petroleum. 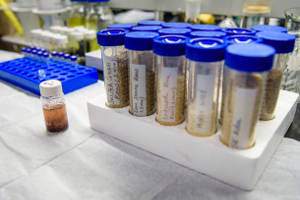 From waste materials such as wood chips and corn cobs, UD researchers are extracting sugars that can replace petroleum in the manufacture of thousands of consumer products. Photo by Evan Krape

The process invented at UD, however, is just one step. It doesn’t require a separate pretreatment step commonly used in biorefineries to disintegrate the lignin from the sugar polymers cellulose and hemicellulose. UD’s one-step technology integrates the pretreatment step and the hydrolysis of cellulose and hemicellulose in one pot and operates at considerably low temperature (85°C) and short reaction time (one hour), which makes the method energy efficient. It’s water efficient, too.

The key to the technology, which has been filed as an international patent application by UD, is the use of a concentrated solution of an inorganic salt in the presence of a small amount of mineral acid. The concentrated salt solution requires a minimal amount of water. The solution swells the particles of wood or other biomass, allowing the solution to interact with the fibers, much like a newspaper swells when water spills on it.

The unique properties of the salt solution make the method very efficient, Saha said, with up to a 95 percent theoretical yield of sugars.

What’s more, the team has integrated the process with another step, called the dehydration reaction, which converts the sugars to furans in the same pot and enables the salt solution to be recycled. Furans are highly versatile compounds used as starting materials for making specialty chemicals.

The UD innovation employs process intensification, the performing of several steps in an integrated fashion, resulting in the use of less energy and water. This concept, implemented on a large scale, is the focus of RAPID, a Manufacturing USA Institute being led by the American Institute of Chemical Engineers, which also involves UD as a key player.

“Our process enables — for the first time — the economical production of feed streams that could profoundly improve the economics of cellulosic bioproducts manufactured downstream, not to mention the environmental benefits of replacing petroleum,” Saha says. “More than 10,000 million metric tons of carbon emissions were reported in 2010 from conventional fossil fuels and chemicals, which has a long-term catastrophic effect on our environment.”

The study’s co-authors included postdoctoral researcher Sunitha Sadula and research associate Weiqing Zheng from UD, and Prof. Marianthi Ierapetritou, chair of the Department of Chemical and Biochemical Engineering, and graduate student Abhay Athaley from Rutgers. The full article is available at this website.