A new twist for better steel

In steel making, two desirable qualities — strength and ductility — tend to be at odds: Stronger steel is less ductile, and more ductile steel is not as strong. Engineers at Brown University, three Chinese universities, and the Chinese Academy of Sciences have shown that when cylinders of steel are twisted, their strength is improved without sacrificing ductility.

PROVIDENCE, R.I. [Brown University] — Researchers from Brown University and universities in China have found a simple technique that can strengthen steel without sacrificing ductility. The new technique, described in Nature Communications, could produce steel that performs better in a number of structural applications.

Strength and ductility are both crucial material properties, especially in materials used in structural applications. Strength is a measure of how much force is required to cause a material to bend or deform. Ductility is a measure of how much a material can stretch without breaking. A material that lacks strength will tend to fatigue, failing slowly over time. A material that lacks ductility can shatter, causing a sudden and catastrophic failure.

Steel is one of the rare materials that is both strong and ductile, which is why it’s ubiquitous as a structural material. As good as steel is, however, engineers are constantly working to make it better. The problem is that methods of making steel stronger tend to sacrifice ductility and vice versa. 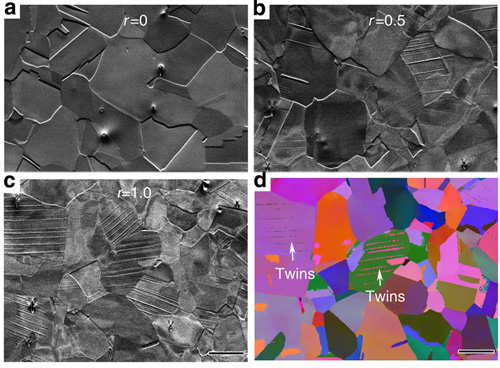 Greater strength without loss of ductility. A steel cylinder that has been deformed by twisting preserves ductility at the core (a). Parallel lines indicate more “deformation twins” closer to the surface (b, then c), a measure of greater strength. Image credit: Gao lab/Brown University

“We call it the strength-ductility tradeoff,” said Huajian Gao, professor of engineering at Brown and senior author on this new research. He and his colleagues have found a way around that tradeoff in cylinders made with a particular kind of steel called twinning-induced plasticity (TWIP) steel.

TWIP steel can be made stronger through what’s called work hardening. Work hardening is the process of strengthening steel by deforming it — bending it, flattening it, or hammering it on a forge. When TWIP steel is deformed, nanoscale structures called deformation twins form in its atomic lattice. Deformation twins are linear boundaries with identical crystalline structures on either side, forming a mirror image across the boundary. Twin structures are known to make TWIP steel much stronger, but just like other ways of hardening steel, there’s a ductility tradeoff.

To evade that tradeoff, Gao and his colleagues introduced a new twist — literally — on the deformation process. Instead of deforming the steel by hammering it or bending it, Gao and his colleagues took small cylinders of TWIP steel and twisted them. The twisting motion causes molecules in the outer parts of the cylinder to deform to a much greater degree than molecules toward the core. The idea is a little like runners on a track. Those running in the outside lanes have more ground to cover than runners on the inside.

Because the twisting motion deforms the outside more than the inside, deformation twins form only toward the surface of the cylinder. The core remains essentially untouched.

The result is a steel cylinder with the best of both worlds — the surface of the cylinder becomes stronger and more resistant to cracking, while the inside retains its original ductility.

“Essentially we partitioned the material into a hardened part near the surface and a softer part near the core,” Gao said. “This allowed us to double the strength without sacrificing ductility.”

The work in the lab was done with very small cylinders — on the order of centimeters long. However, nothing indicates that the process can’t be scaled up to larger cylinders, Gao said.

Eventually, Gao and his colleague hope their technique could be used to pre-treat steel that requires a cylindrical shape—axles or drive shafts on cars for example. In particular, Gao sees torsioned steel as a good option for axles on high-speed trains.

“It’s critical to have high strength and high ductility for such an axle component,” Gao said. “So it’s critical in this kind of system to push this strength-ductility limit as far as possible.”

Gao’s coauthors on the paper were Yujie Wei (lead author and a former postdoctoral fellow at Brown), Yongqiang Li, Lianchun Zhu, Yao Liu, and Xianqi Lei of the Laboratory of Nonlinear Mechanics, Institute of Mechanics, Chinese Academy of Sciences; Gang Wang of Laboratory for Microstructures, Shanghai University; Yanxin Wu and Zhenli Mi of the University of Science and Technology, Beijing; and Jiabin Liu and Hongtao Wang of Zhejiang University.