A literary view of the human era: ‘Anthropocene Reading’

The Anthropocene epoch — the proposed name for this time of significant human effect on the planet and its systems — represents a new context in which to study literature. A new book of essays co-edited by a UW English faculty member argues that literary studies, in turn, also can help us better understand the Anthropocene. 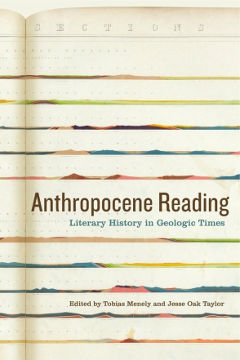 “Anthropocene Reading: Literary History in Geologic Times” is a book of essays co-edited by Tobias Menely of the University of California, Davis, and Jesse Oak Taylor, UW associate professor of English. It was published in October by Penn State Press. Taylor is director of undergraduate programs for the UW Department of English.

The book, Taylor said, grew from seminars he and Menely held at the American Comparative Literature Association conferences in 2015 and 2016. The essays were written specifically for the volume, he said, and contributors heard versions of the papers at the seminars, making the project “truly collaborative.”

Taylor said the questions he and Menely posed of contributors was essentially, “How should we read in the Anthropocene?” Other questions flowed from that, including:

Dating the Anthropocene epoch poses a problem for critical reading, Taylor said, with “tensions between the protocols of Earth system science on the one hand and the stratigraphy on the other.” The era is, after all, “dependent on the inscription of human history within the geologic record.”

In the end, Taylor said, the volume argues that the Anthropocene is not just a new context in which to understand literary works, “but also that the methods of literary analysis and the vantage that literature opens on history are themselves integral to conceptualizing, dating, and ultimately confronting the Anthropocene itself.”

The Anthropocene, he added, “reorients our understanding of history and thus shifts the way we think about literary history as well,” such that “on some level, all literary works become potential records of human interaction with the planet, whether through energy systems, geological events or climatological restraints.”

Taylor is also the author of the 2016 book “The Sky of our Manufacture: The London Fog in British Fiction from Dickens to Woolf.” The book, he said, focuses on Victorian London as perhaps the first-ever example of “a thoroughly manufactured habitat, in which everything, including the weather, bore the legible imprint of human action — that is to say, precisely the challenge posed by the Anthropocene, albeit at smaller scale.”

Taylor also runs a research group on the Anthropocene at the UW Simpson Center for the Humanities, together with Jason Groves, UW assistant professor of Germanics.