A Humanitarian and A Scholar

U alum Lesa Nord talks about her Fulbright Scholar experience

Lesa Nord was one of two U students on the Twin Cities campus to receive a highly competitive Fulbright Scholarship this year to the United Kingdom, where she is completing an interdisciplinary degree in humanitarianism and conflict response at the University of Manchester.

Nord began her college education at North Hennepin Community College before transferring to the U and receiving a bachelor of individualized studies with high distinction from the College of Liberal Arts. Along the way she has become a certified Emergency Medical Technician, and she’s already served as a volunteer interpreter and technician on medical mission trips in developing countries.

We caught up with Nord in the UK after the holidays to talk about her experiences at the U and abroad.

What was your reaction when you learned you were named a Fulbright Scholar?

Nord: I was extremely excited. It is a long process to be selected and there was a lot of waiting. I had an alternate plan in the case that the Fulbright didn’t work out which was to go to medical school this [past] fall in Iowa. I had been trying not to get my hopes up too high, and was basically over the moon to learn that I had been selected. 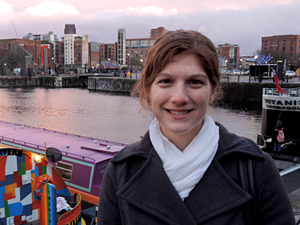 Your master’s will be in humanitarianism and conflict response. What steered you toward those fields, and what drew you to medicine in the first place?

Nord: I went to Mexico when I was 12 and for the first time realized that there was a huge group of people that lived lives different from anything that I had ever seen or experienced before. It was the first time that I had seen poverty on such a large scale and it made a huge impact on me. I did several other trips after that and really felt compelled to try to do something to help.

This also went alongside a love for human biology originating in high school biology. I love medicine because I find humans and how they live and think fascinating and also because it is a practical way to actually do something to help people.

How has your experience been so far at Manchester and with the program?

Nord: The Fulbright program has been incredible. I’ve made so many connections here … and it’s especially [beneficial] because I don’t come from a background of doctors and had never talked with people who worked full time in the humanitarian field before. Now I have several people who can act as mentors and help me in my future career.

What were the fields in your “individualized studies” at CLA, and how has it helped you to be able to choose your areas of focus?

Nord: My focuses were Spanish, life sciences, and linguistics. And for me it was perfect.  In order to go into medical school it isn’t necessary to get a degree in the sciences. The recommendation that I received was to study what you find interesting and make sure that you get some life experiences outside of straight science, which I was eager to do.

I had taken some time off and lived for two years in Argentina and was eager to improve my Spanish, which proved beneficial when I translated for doctors on a short-term medical trip to Honduras.

I was very happy with my program at the U.  I liked that my program gave my the flexibility and freedom to chart a bit more of my own course and I had several great experiences such as working as a TA in the anatomy lab course, working in The Visible Heart Lab doing research, and getting experience as an EMT.

Do you still see yourself in a career as a physician working in international aid, or have your thoughts changed since you’ve been there?

Nord: That’s a really interesting question that I’ve been wrestling with lately. I would still definitely like to do trips, but I’m less certain about going into it full time. It’s not an easy career choice and medicine is demanding as it is.

It’s also interesting to learn about all the ethical implications about going in to help and finding that your help at times can do more harm than good. That doesn’t mean that I don’t think the aid industry is doing good things, just that it really needs to be well thought out. I don’t know what my role will look like in the future, but I do plan to incorporate humanitarian work in some fashion.