A new atlas and catalog of the entire infrared sky with more than a half-billion stars, galaxies and other objects captured by NASA’s Wide-field Infrared Survey Explorer (WISE) mission was unveiled by NASA Wednesday.

“Today WISE delivers the fruit of 14 years of effort to the astronomical community,” said Edward L. (Ned) Wright, a UCLA professor of physics and astronomy and the mission’s principal investigator, who began working on the mission in 1998. 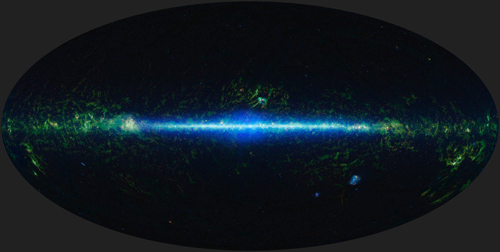 Mapping the infrared universe: The entire sky, as seen by WISE. This is a mosaic of the images covering the entire sky as observed by WISE. The sky can be thought of as a sphere that surrounds us in three dimensions. To make a map of the sky, astronomers project it into two dimensions. The projection used in this image, called Aitoff, takes the three-dimensional sky sphere and slices open one hemisphere, and then flattens the whole thing out into an oval shape. In the mosaic, the Milky Way Galaxy runs horizontally across this map. The Milky Way is a disk; our solar system is located in that disk about two-thirds of the way out from the center. Three of the four wavelengths surveyed by WISE were used to create this image. Image credit: University of California

A 10-foot unmanned satellite weighing 1,400 pounds, WISE was launched into space on Dec. 14, 2009, and mapped the sky in 2010. Like a powerful set of night-vision goggles, WISE surveyed the cosmos with infrared detectors about 300 times more sensitive than those used in previous survey missions, said Wright, who holds UCLA’s David Saxon Presidential Chair in Physics. WISE collected 15 trillion bytes of data and more than 2.7 million images taken at four infrared wavelengths of light — invisible to the unaided human eye — capturing everything from nearby asteroids to distant galaxies.

The individual WISE exposures have been combined into an atlas of more than 18,000 images and a catalog listing the infrared properties of more than 560 million objects found in the images. Most of the objects are stars and galaxies, with roughly equal numbers of each; many of them have never been seen before. 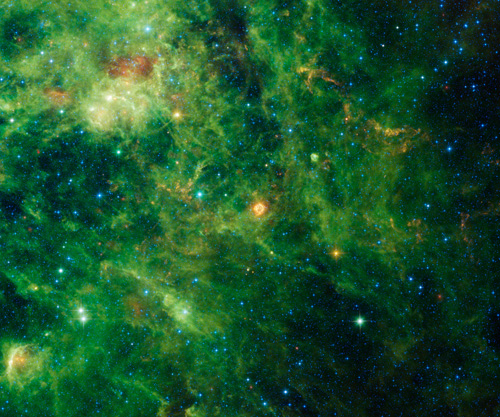 Echoes of a stellar ending. More than 11,000 years ago, a massive, supergiant star came to the end of its life. The star’s core collapsed to form an incredibly dense ball of neutrons, and its exterior was blasted away in an immense release of energy astronomers call a supernova. The light from this supernova first reached Earth from the direction of the constellation Cassiopeia around 1667 A.D. If anyone alive at the time saw it, he or she left no records. It is likely that large amounts of dust between the dying star and Earth dimmed the brightness of the explosion to the point that it was barely, if at all, visible to the unaided eye. The remnant of this supernova was discovered in 1947 from its powerful radio emission. Listed as Cassiopeia A, it is one of the brightest radio sources in the known universe. WISE detected infrared echoes of the flash of light rippling outwards from the supernova. In the image, the central bright cloud of dust is the "blast wave" moving through interstellar space heating up dust as it goes. The blast wave travels fast – at an average speed of about 11,000 miles per second. By the time WISE took this image, the blast wave expanded out to about a distance of 21 light-years from the original explosion. The flash of light from the explosion, traveling at the speed of light, has covered well over 300 light-years. The orange-colored echoes further out from the central remnant are from interstellar dust that was heated by the supernova flash centuries after the original explosion. Image credit: University of California

WISE observations have already led to many discoveries, including elusive failed stars, or Y-dwarfs. Astronomers had been hunting for Y-dwarfs for more than a decade. Because they have been cooling since their formation, they do not shine in visible light and could not be spotted until WISE mapped the sky with its infrared vision. WISE has also found that there are significantly fewer mid-size near-Earth asteroids than astronomers had previously feared. With this data, now more than 90 percent of the largest of the asteroids have been identified.

One image released today shows a surprising view of an “echo” of infrared light surrounding an exploded star. The echo was etched in the clouds when a flash of light from the supernova explosion heated surrounding clouds. More discoveries are expected now that astronomers have access to the WISE images. 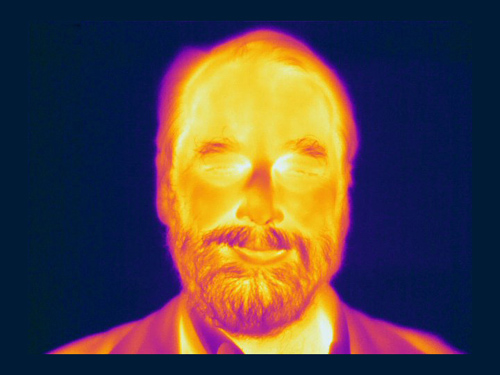 An infrared image of Edward L. (Ned) Wright, WISE's principal investigator and a UCLA professor of physics and astronomy. In the image, warm objects appear brighter than cool ones. His eye sockets are the hottest and brightest, while his clothes are cooler and look dark. NASA's Wide-field Infrared Survey Explorer, or WISE, will measure infrared light from asteroids, stars, galaxies and more. Image credit: University of California

In another image, moving objects such as asteroids and comets were removed, but residuals of the planets Saturn, Jupiter, and Mars are visible as bright red spots off the plane of the galaxy at the 1 o’clock, 2 o’clock and 7 o’clock positions, respectively.

“With the release of the all-sky catalog and atlas, WISE joins the pantheon of great sky surveys that have led to so many remarkable discoveries about the universe,” said Roc Cutri, who leads the WISE data processing and archiving effort at the Infrared and Processing Analysis Center at the California Institute of Technology. 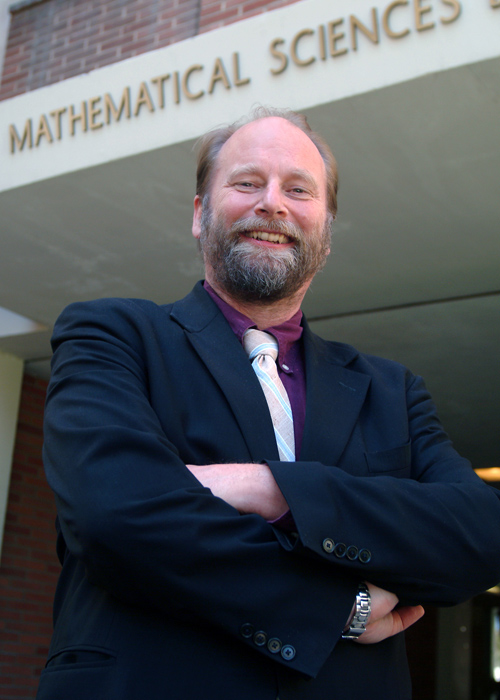 The entire collection of WISE images released so far can be seen at https://wise.ssl.berkeley.edu/gallery_images.html.

An introduction and quick guide to accessing the WISE all-sky archive for astronomers is online at https://wise2.ipac.caltech.edu/docs/release/allsky/.

Instructions for technically-minded people who want to explore the archive are at https://wise.ssl.berkeley.edu/wise_image_service.html.

More information is online at https://www.nasa.gov/wise.

– By Whitney Clavin and Stuart Wolpert