‘A fresh glimpse at old evidence’: A new look at an old jaw clarifies mammal evolution

New technologies have brought new significance to a set of fossilized jaws that Stephen Gatesy and colleagues found in Greenland 20 years ago. Their new analysis shows that proto-mammals were diversifying earlier than previously thought.

PROVIDENCE, R.I. [Brown University] — On an expedition to Greenland in the summer of 1995 — their fifth season of digging in the tundra — a team including Stephen Gatesy, Neil Shubin, and Farish Jenkins had finally found something that might yield a clue about mammal evolution: A pair of one inch long jaws embedded in limestone.

“When I first picked up the cell-phone sized slab of rock containing the two jaws I could tell that it was something important — multi-rooted teeth with complex cusps were obvious, both advanced features,” recalled Gatesy, professor of ecology and evolutionary biology at Brown Unviersity. “But after finding the counter-slab — the matching rock containing more bone — nearby, we spent days looking for more with very little success. It was more than a bit anticlimactic because you can’t do much with a tiny specimen like that in the field; you wrap it up and wait to get it back to the lab.

“Once more details were revealed by manual preparation with fine needles under a microscope,” he said, “we realized that we’d found the first haramiyid fossil that was more than just isolated teeth. Having teeth together in jaws let us interpret their chewing motion and infer diet.” 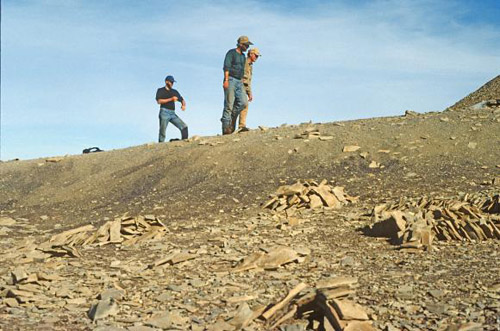 Haramiyids, it turns out, were early precursors to mammals that lived 210 million years ago. The team’s interpretation, published in Nature in 1997, was that the fossil represented an example of proto-mammal diversification occurring well before the origin of “crown mammals.” Over the next 20 years, the idea proved to be a subject of considerable debate.

Now the team has published a new analysis in the Proceedings of the National Academy of Sciences, using technologies such as high-resolution computer tomography and 3-D computer reconstruction, that weren’t available two decades ago. Shubin’s lab at the University of Chicago led the work.

The analysis revealed complex teeth and chewing motions adapted for an herbivorous diet. This indicates that diverse feeding adaptations were evolving in the Triassic era among these proto-mammals. On the other hand, primitive structures of its jaw provided evidence that the species and its relatives were not “crown mammals,” which emerged later in the Jurassic era after the end-Triassic extinction event.

“Micro-CT scanning allowed extremely detailed 3-D models to be created of each tooth and bone,” Gatesy said. “We then combined evidence from all the material into a composite jaw. I don’t think this would have been possible without digital tools. Our anatomical conclusions largely corroborate the findings of our earlier paper but also increase our confidence in key characters.”

In other words, new technology allowed the team to make the most of the small, hard-earned find made after years of digging near the top of the world.

“It’s always satisfying when better methods come along to offer a fresh glimpse at old evidence,” Gatesy said. “I also found the revival of our old collaboration both nostalgic and bittersweet. Sadly, we lost two of our five co-authors within the last three years and they are sorely missed.”

Gatesy’s work goes on and he continues to be inspired by the team’s other findings in the Arctic.

“The dinosaur footprints we uncovered have changed the path of my career so that now fossil tracks are a major component of my research,” he said. “Although I haven’t been back to the Arctic since 2004, I’m actively looking at old and new sites with dinosaur footprints in the nearby Connecticut River Valley.”

In the classroom, meanwhile, Gatesy uses his basic research on anatomy across many creatures and hundreds of millions of years to help teach the gross anatomy class to first-year medical students.

In addition to Gatesy, Shubin and the late Jenkins, the paper’s other authors are lead author Zhe-Xi Luo, and the late William Amaral, another member of the original team.