A Few Winners, But Many More Losers

Southwestern Bird and Reptile Distributions to Shift as Climate Changes

Dramatic distribution losses and a few major distribution gains are forecasted for southwestern bird and reptile species as the climate changes, according to just-published research by scientists with the U.S. Geological Survey, the University of New Mexico, and Northern Arizona University.

Overall, the study forecasted species distribution losses – that is, where species are able to live – of nearly half for all but one of the 5 reptile species they examined, including for the iconic chuckwalla. The threatened Sonoran (Morafka’s) desert tortoise, however, is projected to experience little to no habitat losses from climate change.

The iconic pinyon jay is expected to experience from one-fourth to one-third loss in breeding habitat in the future, as its welfare is tied to declining pinyon pine habitat.

“Not surprisingly, whether a species is projected to be a winner or a loser depends primarily on its natural history and habitat needs and requirements,” said USGS scientist Charles van Riper III, the lead author on the study. “Land managers should be aware of these potential changes so that they can adjust their management practices accordingly.” 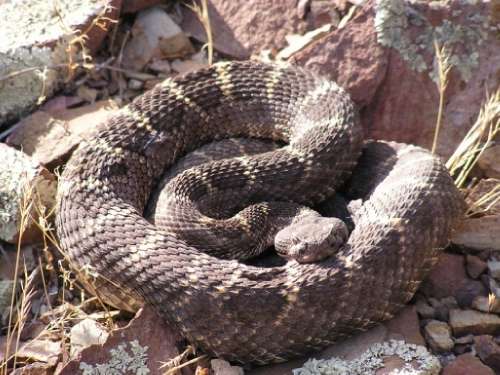 To conduct the study, scientists coupled existing global climate change models with newly developed species distribution models to estimate future losses and gains of 7 southwestern upland bird species and 5 reptile species. The study area focused on the Sonoran Desert and Colorado Plateau ecosystems within Arizona, western New Mexico, Utah, southwestern Colorado and southeastern California, but also included the rest of the Western United States. Focal wildlife species included resident and migratory birds and reptiles, which make up most of the vertebrate biodiversity in the region.

“Changes of this magnitude may have profound effects on distribution and viability of many species,” noted Stephen T. Jackson, director of the Interior Department’s Southwest Climate Science Center. “Temperature matters a lot, biologically, in arid and semi-arid regions.” 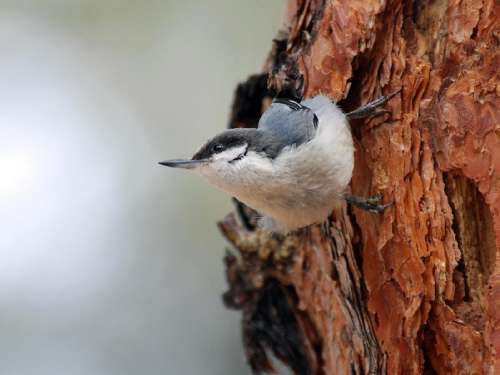 The pygmy nuthatch has a strong and almost exclusive preference for long- needled pines including ponderosa, Jeffrey, and similar species. It depends on cavities for nesting and roosting and has clear seasonal cavity preferences, related to thermal insulation and ventilation. Seventy percent of nest cavity openings face southward, others face south and east, away from prevailing winds. Selection of the roost cavity is affected by weather and by characteristics of the cavity (such as type of wood, thickness of bole, size of entrance, and depth of cavity) that afford protection from outside ambient temperatures. Temperature and presence of snow influence both time of roosting and size of roost flock. Flocks roost earlier as temperatures drop and flock size increases when snow covers ground. While roosting they use protected sites, huddling, and hypothermia for energy-saving mechanisms. The pygmy nuthatch feeds almost exclusively in pines and eats weevils, leaf and bark beetles, and pine seeds. Energy assimilated increases with rising ambient temp and barometric pressure, and decreases with higher wind speeds and precipitation. Temperature and wind speed have greatest effect – individuals are less active on colder and windier days, when they are more apt to roost in the shelter of a branch or in a cavity. Image credit: National Park Service

One very practical result of the project is a website with a series of range maps projecting the potential effects of climate change on bird and reptile distributions in the Western United States for three different time periods in the next 90 years. These predictions can help managers and policy makers better prioritize conservation effects, van Riper said.

“Wildlife resource managers need regionally specific information about climate change consequences so they better identify tools and strategies to conserve and sustain habitats in their region,” said Doug Beard, director of the USGS National Climate Change and Wildlife Science Center that supported the project.  “Managers can use these results to help plan for ways to offset projected effects of climate change on these species.” 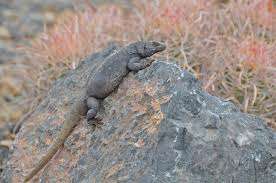 The Common Chuckwalla is primarily found across the Mojave and Sonoran deserts of the United States and Mexico, at elevations ranging from sea level to 1,370 m. This large (125–180 mm) lizard is dorsoventrally flattened and has wrinkles on its belly and neck. Chuckwallas are strongly associated with rock outcrops, lava flows, and boulder piles, and are well-known for their defensive behavior of inflating their bodies to wedge themselves in crevices. They are herbivorous, eating the leaves, flowers, and shoots of annual and perennial plants in the Mojave desert, and primarily perennial plants in the Sonoran desert. Preferred species of forage plants near Phoenix, Arizona, included mallows, desert lavender, America threefold, goldeneye, wolfberry, foothills palo verde, and ocotillo. Chuckwallas usually maintain active body temperatures between 35 and 40 degrees Celsius, yet wild individuals apparently obtain all of their water for metabolic needs from eating plants. Chuckwallas are long-lived and females may not breed every year. A clutch of 5–16 eggs is laid in mid to late summer, and hatchlings emerge in the fall, winter, or even the following spring. Although this species is common in many areas, in some locations excessive collecting and habitat destruction threaten population. Image credit: Fish and Wildlife Service

Overall: Future climate change will negatively affect the distributions of reptiles in the Western and Southwestern U.S. The one exception is the Sonoran desert tortoise, which is forecasted to expand, and, if a decrease happens, only by about one percent.

Reptiles can’t move as easily as birds nor can they regulate their body temperature, so they can only move minimally in response to changing climates.  The authors found that the greater the projected distributional gain or loss in a reptile species was directly tied to the warmth of its current range.  Thus, the less mobile reptiles will be more greatly affected by increasing temperatures.