A male cougar in search of a mate traveled more than 1,500 miles from the Black Hills of South Dakota to Connecticut, leaving a trail of clues that enabled scientists to verify his odyssey.

The cougar’s journey, recounted in Journal of Mammalogy, shows a wealth of evidence that scientists can use to document animal movement, says co-author Roland Kays, a wildlife biologist with NC State University and the North Carolina Museum of Natural Sciences.

“This cougar did not have a tracking collar, so we relied on genetic connections from hair and fecal samples, along with photos from camera-traps operated by citizen scientists,” says Kays, who also featured the cougar’s story and photo in his new book, Candid Creatures. 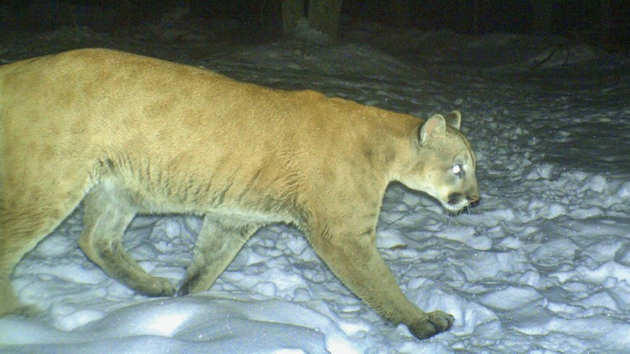 A Wisconsin camera trap photographed the male cougar on his record-setting trek from South Dakota to Connecticut. Faint spots in the animal’s coat can still be seen, revealing the young age of this otherwise large male. (Photo credit: Lue Vang)

Researchers used forensic techniques to match the hair and droppings to DNA samples from the cougar, which died after being struck by a car in Connecticut. Combined with photos and findings from the necropsy, the evidence allowed researchers to make a positive ID of the animal, identify South Dakota as his point of origin, and trace his path, which included stops in Minnesota, Wisconsin and New York before his tragic death in Connecticut.

“This cougar didn’t know where he was going. He didn’t have a road map,” Kays says. “If he’d gone west, he would have found a girlfriend. Instead, he went east and just kept going and going.”

Although this is the longest dispersal ever recorded for a cougar, it is not the first animal to leave South Dakota and head into new territory, moving outside of the established range for the species. This shows that many western cougar populations are healthy and could end up reclaiming their old territory in the East, if a female ever joins the dispersing males to create a breeding population.

However, this example also casts doubt on the idea that any portion of the Northeast already has a cougar population.

“The wealth of verifiable evidence left by this single animal brings doubts about the hundreds of unverified sightings in the region,” Kays says. “This shows that big animals like this cannot move across the landscape without leaving scientific evidence proving their existence.”