*Studies of diving beetles suggest sperm evolution may be driven by changes in female reproductive organs, challenging the paradigm of post-mating sexual selection being driven mostly by competition among sperm.*

“Our findings show that sexual selection isn’t always all male-male competition,” said Dawn Higginson, the study’s lead author who is a postdoctoral research associate at the UA’s Center for Insect Science, who did much of the work for this study with her doctorate advisor Scott Pitnick, a professor of biology at Syracuse University in Syracuse, N.Y. 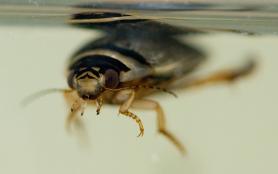 “Rather than standing at the sidelines, it appears that females can take the lead in driving the evolution of male sexual traits,” Higginson said.

The study results will be published the week of Feb. 6 in the journal Proceedings of the National Academy of Sciences.

Unlike most mammals in which fertilization involves large numbers of simple-built, individual sperm cells racing for the egg through a rather straightforward female reproductive tract, many other animal groups, especially invertebrates such as mollusks and insects, have evolved complex anatomical variations in both sperm and female reproductive organs.

According to Pitnick, sperm shape does not show much variation in species whose eggs are fertilized after they have left the female, such as most fish, for example.

Although copulation and fertilization occur within hours or days of each other in mammals and other groups, it is more common for the female to store the sperm she received from one or several males, sometimes for years, and exert control over when and how her eggs are fertilized.

This is an image of a sperm conjugate from the diving beetle, Hygrotus sayi. It is a composite image with three images taken at the same magnification. On the left is a darkfield image showing both sperm heads and tails. On the right is the same conjugate viewed using epifluorescence, showing the heads only. The inset shows an epifluorescence image (heads only) of two different types of sperm that together form the conjugate. Photo: D. Higginson

“Diving beetles can be found in just about every puddle of water,” she said. “Here in the Arizona desert, most cattle tanks or natural pools will have numerous species of them. They’re everywhere, except salt water, which they can’t tolerate.”

All are voracious predators, such as the Great Diving Beetle, which is common in Europe. Both larva and adult stalk small fish or tadpoles underwater, until they pounce and subdue them with pointy mandibles shaped like curved daggers.

In an attempt to better understand sperm evolution, Higginson and Pitnick came across descriptions of paired sperm in diving beetles dating back more than a hundred years. Female reproductive tracts in these animals were not systematically investigated until ten years ago.

Previous studies on the interaction between sperm and female reproductive organs established simple relationships between the two such as duct length and sperm length, but did not look much farther than that, Higginson said. 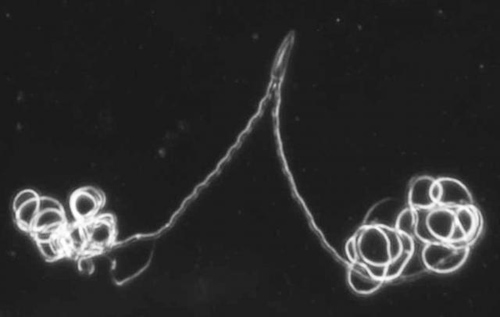 These are paired sperm of the diving beetle, Thermonectus marmoratus. The darkfield microscopy image shows both heads and tails of the paired sperm, which is a quarter millimeter long. Photo: D. Higginson

She remembered squashing a spermatheca, which is the part of the female tract that stores the sperm, on a microscope slide, and out came a single, enormous mass of sperm, all connected to each other and swirling and wiggling around. Previous studies had reported diving beetle species whose sperm cells join up in pairs, but seeing lots of individual sperm cells aggregating into one single conjugate was something unexpected and new.

“I could see the tails beating and moving the whole conjugate around,” Higginson said. “As far as sperm goes, this is clearly unlike anything we have ever seen before.”

In some species she found hundreds or even thousands of sperm cells stacked up like badminton birdies, forming a long, fairly rigid rod of sperm resembling a fuzzy worm as it moves around inside the female. In other species, sperm are connected by their heads with some kind of glue.

Higginson then set out to investigate what evolutionary forces are the most likely to drive all this unexpected diversity. In an unprecedented effort, she measured many different parameters such as overall sperm length, head length, tail length, length of the female ducts, area of the sperm storage chambers, presence of conjugates, head shape and so on. Using statistical tools to analyze evolutionary relationships among traits, she then reconstructed the most likely evolutionary relationships between sperm and female reproductive tracts.

“We can reconstruct what the ancestors of these diving beetles looked like,” Higginson explained. “We find they had conjugated sperm and rather compact female reproductive tracts. The female morphology undergoes evolutionary change, and then sperm compensates for that. We can’t say from this study that the males are catching up but it’s suggesting there could be an arms race.”

Pitnick said: “When you look at the intricate morphology of the reproductive tracts, you can’t help but think that sperm needs Swiss army knives and compasses to make it through there. The females make it really complicated.”

“In most cases of sexual selection, we expect co-evolution between a female preference for a male trait, like flashy tails in peacocks,” Higginson said. “Females prefer males with flashy tails, and then females want bigger and flashier tails after that, setting up a co-evolutionary cycle. We are not positive that this is happening here, but is possible that all this diversity we see in the sperm is the equivalent of flashy peacock feathers, and females have evolved reproductive tracts that favor one kind of sperm over another.”

“Perhaps there is something else that is influencing the evolution of the female reproductive tract,” she added. “Perhaps it has to be big enough to handle an egg properly or something like that. The point is that the females are driving the sexual evolution. The sperm cells just have to keep up.”

Pitnick added that given that no other cell type evolves as rapidly as sperm, variations in compatibility between sperm and the female reproductive system could be an important engine of speciation.

“If populations become separated and those traits are evolving rapidly in different directions, they will separate into two different species very quickly.”

As in many other species, female diving beetles may not have a lot of control over with whom they mate, and that may be a driving factor in the evolution of intricate reproductive systems.

Being insects that spend most of their lives underwater, the beetles have to breathe air regularly.

“They come to the surface and take a little bubble with them when they swim back down,” Higginson said. “Male diving beetles have suction cups on their feet that they use to grab on to the females. They can even prevent the females from breathing when they’re holding on to their backs, which may be an attempt to pressure them into mating.”

“One reason for this situation in which sperm from different males compete inside the female may be that females can mate with whomever they encounter and choose later,” she said.

The study, “Female reproductive tract form drives the evolution of complex sperm morphology,” was co-authored by Kelly Miller from the University of New Mexico, in Albuquerque, N.M., Kari Segraves and Scott Pitnick from Syracuse University in Syracuse, N.Y.