A better view of the Rockies, thanks to a geological feature in Peru

Scientists are getting an unprecedented look at a geological process in South America that mirrors the formation of America’s Rocky Mountains.

Writing in the journal Nature, a team of geophysicists says its findings may help scientists better understand phenomena such as earthquakes and volcanoes, in addition to the development of the Rockies. The data comes from 40 broadband seismometers placed throughout southern Peru as part of the Peru Lithosphere and Slab Experiment (PULSE).

At the heart of the study is the interaction between plates that make up the Earth’s crust. Typically, where two plates meet, one will slide under the other and sink steeply into the Earth’s mantle over a period of millions of years. That process is known as subduction.

However, sometimes the lower plate behaves differently. Rather than sinking steeply, the plate slides horizontally for several hundred kilometers before bending and resubducting. This is called flat-slab subduction. 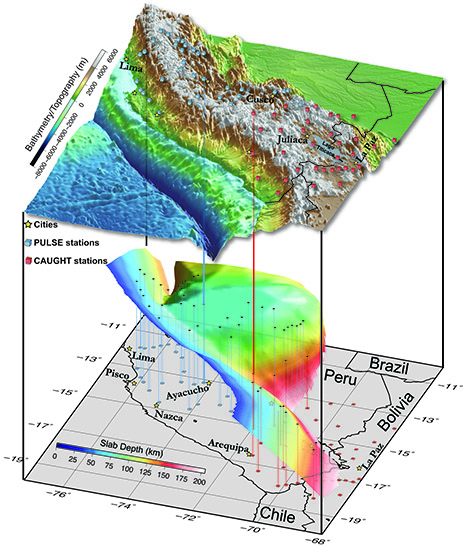 The revised geometry of the downgoing Nazca plate beneath the Andean mountains in southern Peru and northern Bolivia. Seismic stations are shown as colored cubes. Vertical lines show the location of these stations projected onto the slab. (Image courtesy of Lara Wagner)

“This behavior is not well understood at all, but it’s very important for how mountains develop on the plate above the slab,” said co-author Maureen Long, assistant professor of geology and geophysics at Yale. “We think that the Rocky Mountains developed because of an episode of flat-slab subduction.”

The world’s largest flat slab is located beneath Peru. There, the oceanic Nazca Plate is being subducted under the continental South American Plate.

The researchers used data from their seismometers to image the subducted plate in unprecedented detail. They identified a probable tear in the slab that is likely starting to subduct normally again.

“Our model provides insights into the way that the Peruvian flat slab formed and evolved over time that can be applied to the studies of other flat-slab subduction events, such as the one that formed the Rocky Mountains,” said co-author Lara Wagner, of the Carnegie Institution for Science.