7 shopping prophecies from a retail futurist

Doug Stephens is always thinking about tomorrow. And about next year. And the year 2039.

The founder and president of Retail Prophet – one of the world’s top retail consultancies – has logged more than two decades in the industry, leading brands, authoring two books and offering his advice to numerous companies. As he likes to tell clients: “There’s no such thing as being fashionably late for your future.”

On a recent weekday in New York City, Stephens paused to predict how technology will vastly reshape the shopping experience, how retail marketing will change and how the stores themselves will look in the coming years. Yes, there will still be stores, he says.

Transform grabbed a few minutes with Stephens to hear seven futuristic retail realities he envisions, including his views on AI. Based on the interview, here is the thought leader’s forecast, in his words:

AI has the capacity to learn, to become smarter and more intuitive. It will reshape virtually every aspect of the retail industry – and the industry’s relationship with consumers.

Microsoft is working heavily in the AI field. Imagine where we’re going to be in 20 years. I fully believe that consumers will operate with an artificial intelligence that they can create and tailor in whatever form they like. They will make it look and sound like whatever they’re comfortable with. And it will go everywhere with them. 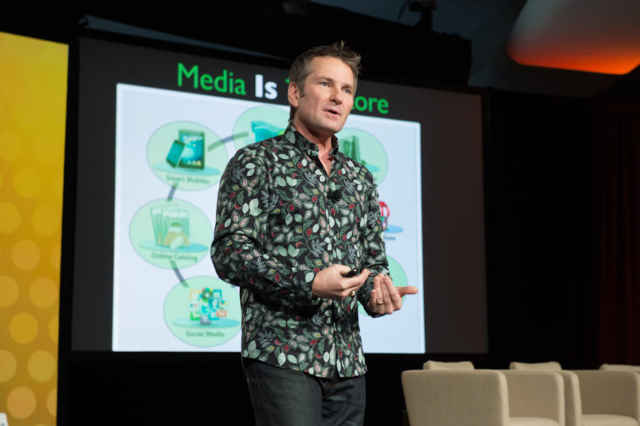 AI will be a problem for marketers. If they want to appeal to a consumer, marketers may have to go through their AI-enabled, virtual assistant to get to that consumer.

The consumers are going to ask the assistant so many questions. What should I buy? Where should I eat? Which airline should I travel on?

AI is going to take all the emotion out of all those decisions. So consumers won’t be affected by the kind of emotional marketing we see today – ads that show families sitting eating together, traveling with their children, petting the dog. AI won’t care about any of that. Consumer decisions are all going to be based on hard-and-fast metrics.

Brick-and-mortar stores will retain a firm a place in our economy.

Many products still carry a level of immediacy. Waiting a day or two for them just seems silly.

Case in point: drug stores. Look in your medicine cabinet. When you need one of those products, you tend to go get it. That probably won’t change.

Similarly, stores that require significant interaction with the staff. A prime example: home improvement stores. They answer our questions. Is this item right for my needs? How do I install this? If this is beyond my abilities, who can install this for me?

And let’s not forget: Many of us still like shopping in stores.

Another reason many traditional stores will stick around: Millennials like shopping there.

No doubt, today’s retail landscape was built for a different generation of consumers. So we shouldn’t be shocked that millennials aren’t pouring into the malls the way younger people did in the 1970s and ‘80s.

Millennials have lived their whole lives being stimulated by inordinate amounts of media. By comparison, most retail is relatively boring, if we get right down to it. How many times a week do you walk into a store and say, ‘You know, I need to take a selfie of this place?’ Zero.

However, we are starting to address these issues. And I’ve seen no evidence whatsoever that millennials just don’t like the physical shopping experiences. That will not change with time.

The grocery store of tomorrow will be far smaller.

With more grocery products coming to our homes from our online shopping, retailers will continue to collapse their spaces. I imagine no cereal aisles, no detergent aisles.

Instead I see maybe a restaurant in the middle of the store where people can learn how to cook things, like different ethnic dishes every week.

If your brand is largely about convenience, ease and taking the friction out of shopping, you will have to focus on those elements and bolster that story in the consumer’s mind.

These stores won’t ask you to stop and take 20 minutes to engage with a shopping experience. They will put the things you need right in front of you to make it easy, so you don’t have to think about price, so you can get right out the door.

If discount retailers do that through technology, they’re going to carve out a very strong position. When we use the word “experience,” often our minds jump to these highly immersive, physically engaged store environments. But “experience” isn’t necessarily tied to luxury.

No single retail brand has yet claimed victory in the digital revolution – but one will.

There hasn’t been a company that can say, ‘We’ve figured it all out. We’ve nailed it.’ That said, there are some courageous, adventurous and insightful things happening across numbers of brands. Nordstrom, for example.

They had the courage to say, ‘What if we were to create a 3,000-square-foot department store that doesn’t stock any products? What if, in that store, everything gets ordered online and delivered to that store. And people come, try on their products and have a glass of wine?’ Sure enough, that became Nordstrom Local.

At some point, after all of the cumulative learnings like that are gained from various digital initiatives, I believe there will be one retailer that is able to bottle it all up in one place.

Of course, the troubling thing is by the time that happens, the retail industry will have shifted once again. It’s always moving – and always quickly.