A new University of Colorado Boulder study shows for the first time that episodes of reduced precipitation in the southern Rocky Mountains, especially during the 2001-02 drought, greatly accelerated development of the mountain pine beetle epidemic.

The study, the first ever to chart the evolution of the current pine beetle epidemic in the southern Rocky Mountains, compared patterns of beetle outbreak in the two primary host species, the ponderosa pine and lodgepole pine, said CU-Boulder doctoral student Teresa Chapman. The current mountain pine beetle outbreak in the southern Rockies — which range from southern Wyoming through Colorado and into northern New Mexico –is estimated to have impacted nearly 3,000 square miles of forests, said Chapman, lead study author.

While the 2001-02 drought in the West played a key role in pushing the pine beetle outbreak into a true regional epidemic, the outbreak continued to gain ground even after temperature and precipitation levels returned to levels nearer the long-term averages, said Chapman of CU-Boulder’s geography department. The beetles continued to decimate lodgepole pine forests by moving into wetter and higher elevations and into less susceptible tree stands — those with smaller diameter lodgepoles sharing space with other tree species.

“In recent years some researchers have thought the pine beetle outbreak in the southern Rocky Mountains might have started in one place and spread from there,” said Chapman. “What we found was that the mountain pine beetle outbreak originated in many locations. The idea that the outbreak spread from multiple places, then coalesced and continued spreading, really highlights the importance of the broad-scale drivers of the pine beetle epidemic like climate and drought.” 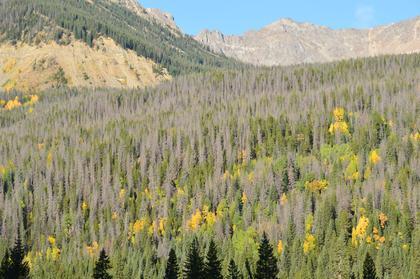 The 2001-02 drought in the West greatly accelerated the current mountain beetle epidemic in the southern Rockies, says a new CU-Boulder study. Photo courtesy University of Colorado

A paper on the subject was recently published in the journal Ecology. Co-authors on the study include CU-Boulder geography Professor Thomas Veblen and Tania Schoennagel, an adjunct faculty member in the geography department and a research scientist at CU-Boulder’s Institute of Arctic and Alpine Research. The National Science Foundation funded the study.

Mountain pine beetles are native insects that have shaped the forests of North America for thousands of years. They range from Canada to Mexico and are found at elevations from sea level to 11,000 feet. The effects of pine beetles are especially evident in recent years on Colorado’s Western Slope, including Rocky Mountain National Park, with a particularly severe epidemic occurring in Grand and Routt counties.

Chapman said the most recent mountain pine beetle outbreak began in the 1990s, primarily in scattered groups of lodgepole pine trees living at low elevations in areas of lower annual precipitation. Following the 2001-02 drought, the outbreak was “uncoupled” from the initial weather and landscape conditions, triggering a rise in beetle populations on the Western Slope and propelling the insects over the Continental Divide into the northern Front Range to infect ponderosa pine, Chapman said.

The current pine beetle epidemic in the southern Rocky Mountains was influenced in part by extensive forest fires that ravaged Colorado’s Western Slope from roughly 1850 to 1890, said Chapman. Lodgepole pine stands completely burned off by the fires were succeeded by huge swaths of seedling lodgepoles that eventually grew side by side into dense mature stands, making them easier targets for the pine beetles.

“The widespread burning associated with dry years in the 19th century set the stage for the current outbreak by creating vast areas of trees in the size classes most susceptible to beetle attack,” said Chapman.

Veblen said a 1980s outbreak of the pine beetle centered in Colorado’s Grand County ended when extremely low minimum temperatures were reached in the winters of 1983 and 1984, killing the beetle larvae. But during the current outbreak, minimum temperatures during all seasons have been persistently high since 1996, well above the levels of extreme cold shown to kill beetle larvae in laboratory experiments.

“This implies that under continued warming trends, future outbreaks will not be terminated until they exhaust their food supply — the pine tree hosts,” said Veblen.

Chapman said there has been a massive and unprecedented beetle epidemic in British Columbia, which also began in the early 1990s and has now has affected nearly 70,000 square miles. “It is hard to tell if this current beetle epidemic in the Southern Rockies is unprecedented,” she said. “While warm periods in the 16th century may have triggered a large beetle epidemic, any evidence would have been wiped out by the massive fires in the latter part of the 19th century.”

Veblen said while the rate of spread of the mountain pine beetle in lodgepole pine forests has declined in the southern Rocky Mountains during the past two years because of a depletion of host pine population, U.S. Forest Service surveys indicate the rate of beetle spread in ponderosa pine forests on the Front Range has increased sharply over the past three years. “The current study suggests that under the continued warmer climate, the spread of the beetle in ponderosa pines is likely to grow until that food source also is depleted,” Veblen said.

“Our results emphasize the importance of considering different patterns in the population dynamics of mountain pine beetles for different host species, even under similar regional-scale weather variations,” said Chapman. “Given the current outbreak of mountain pine beetles on the Front Range, their impact on ponderosa pines is certainly something that needs further study.”

A 2012 study by CU-Boulder Professor Jeffry Mitton and graduate student Scott Ferrenberg showed some Colorado pine beetles, which had been known to produce only one generation of tree-killing offspring annually, are producing two generations per year due to rising temperatures and a longer annual warm season. Because of the extra annual generation of beetles, there could be up to 60 times as many beetles attacking trees in any given year, according to the study.

In addition, a 2011 study led by CU-Boulder graduate student Evan Pugh indicated the infestation of trees by mountain pine beetles in the high country across the West could potentially trigger earlier snowmelt and increase water yields from snowpack that accumulates beneath affected trees.