ANN ARBOR, Mich. — Old memories die hard. Simply reminding college students of the O.J. Simpson trial can alter the quality of their working relationships, according to University of Michigan research.

A new study shows that if the students were from different racial backgrounds—such as white and black—then their relationship and task performance were harmed. If the participants were all one race, then their relationship and the objectively measured task performance actually improved. The findings are published in the current issue of the Journal of Personality and Social Psychology

“African Americans get along better with other African Americans and whites get along better with other whites if they’re thinking about O.J. Simpson,” said Terri Conley, a U-M assistant professor of psychology and women’s studies. “Whites and blacks don’t get along as well when they’re thinking about O.J. Simpson. Most remarkably, we found this to be true even 10 years after the civil trial, providing evidence for the longstanding impact of racially based media events in our everyday lives.”

Simpson, a nationally known football player and actor who had a long TV and film career, was acquitted of murdering his former wife and her friend 15 years ago. Polls at the time showed minorities believed Simpson was innocent while a majority of whites believed he was guilty. In 1997, he was found responsible for their wrongful deaths in a civil trial. In 2007, he was arrested for armed robbery and later convicted. 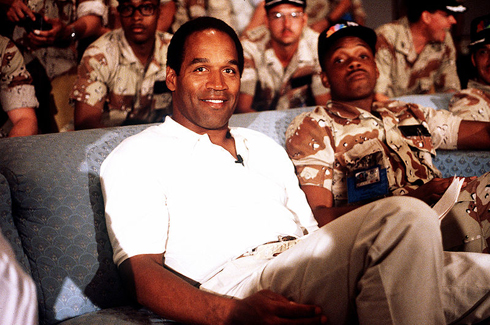 “This is a story about consensus versus dissensus, not racial prejudice or familiarity with a famous person,” said U-M psychology researcher Joshua Rabinowitz, who is also a U-M Institute for Social Research assistant research scientist. “We primed some people with images of Bill Cosby, Mike Tyson, or familiar buildings, and these just didn’t drive people apart or bring them together like the Simpson trial did.”

Cosby, a popular comic, and Tyson, a former heavyweight champion, who both stirred their own controversies in recent years, allowed the researchers to rule out group identity or racial stereotyping as the causal agent. Rather, the well-documented consensus within racial groups and disagreement between racial groups regarding Simpson’s guilt seemed to be the bigger issue.

Some of the data were obtained more than 10 years after the conclusion of the Simpson civil trial but researchers still found the effects. These findings are a testament to the lingering effects of the nationally televised trial that saturated media and the power of varying interpretations held by different cultural groups, he said.