AUSTIN, Texas — Researchers at The University of Texas at Austin have devised a simple test, using dopamine-deficient worms, for identifying drugs that may help people with Parkinson’s disease.

The worms are able to evaluate as many as 1,000 potential drugs a year. The researchers have received federal funding that could increase that to one million drug tests a year.

The test is based on the difficulty that these “parkinsonian” C. elegans worms have in switching from swimming to crawling when they’re taken out of water.

“They can crawl fine,” says Jon Pierce-Shimomura, assistant professor of neurobiology. “They go into a puddle and can swim fine. But as soon as the puddle goes away they crash. In some cases an individual will remain rigid for about a half hour.” 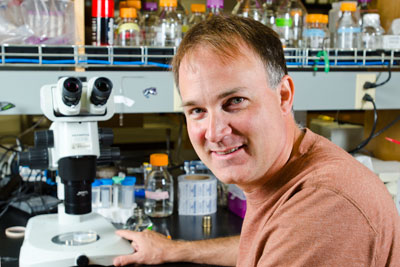 Jon Pierce-Shimomura may soon be able to test as many a million compounds a year as possible drugs for Parkinson's disease. Photo: Marsha Miller

Pierce-Shimomura led a team of researchers, including Andres Vidal-Gadea, Stephen Topper and Layla Young, to identify this “motor switching” problem. Their findings were published last month in the Proceedings of the National Academy of Science.

“We take these motor transitions for granted,” says Pierce-Shimomura, “like getting up out of a chair or walking through a doorway from one surface to another. But people with Parkinson’s have a terrible time with this. They freeze at the threshold. It looks like we have a very simple worm model for this now.”

To identify potential therapeutics, Pierce-Shimomura begins with worms that have been mutated to be deficient in producing dopamine. It’s the loss of dopamine-producing cells in the brain that causes Parkinson’s disease in humans. 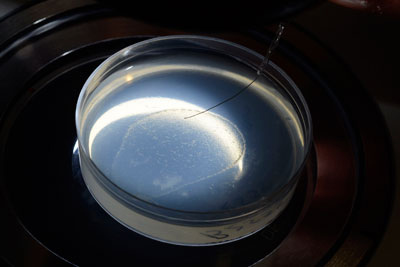 Barely visible nematodes like these share an ancient, conserved genetic structure with humans. It's that common genetic heritage that allows scientists such as Pierce-Shimomura to use the worms as a model species for studying Parkinson's disease.Photo: Marsha Miller

The dopamine-deficient worms are put through the same paces that lead to the immobility, but in the presence of a drug.

If they become immobile as they normally would when water is removed, the researchers move on to the next drug. But if somehow a drug helps the worms’ brains overcome the dopamine deficiency and they transition to crawling, the lab has a potential therapeutic.

Pierce-Shimomura says that although humans have a vastly more complex nervous system than the worms, the two species share an “ancient and conserved” genetic structure to their dopaminergic systems. What works to overcome a dopamine deficiency in the worms may do something similar in humans, and it can be tested in worms with extraordinary speed. 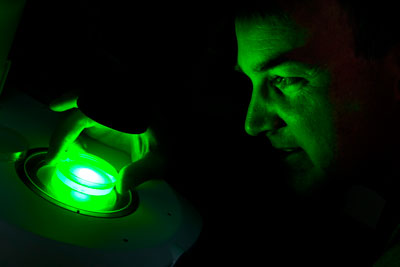 Pierce-Shimomura has already begun testing potential drugs for Parkinson’s. So far he’s found one compound that shows promising effects in the worms. The particular compound has already been approved for use in humans for treatment of another condition.

Working with the university’s Office of Technology Commercialization, he’s filed a patent application for the worm model for testing of neurodegenerative diseases such as Alzheimer’s and Parkinson’s.

About half a million Americans suffer from Parkinson’s disease, a degenerative disorder of the central nervous system. Early symptoms of the disease include shaking, rigidity, and slowness of movement. As it progresses, the physical symptoms can advance to the point of incapacity, and cognitive impairments, including early dementia, can arise as well.

A huge barrier to preventing or treating diseases such as Parkinson’s is the amount of time it takes to identify drugs that work effectively. Typically, drugs are tested on mice — a process that is expensive and requires one to two years for mice to age while testing just a few dozen drugs at a time.

With the help of a few undergraduates Pierce-Shimomura believes that he can test about 1,000 drugs a year. The number could rise to one million a year if the process can be automated.

He recently received a competitive $3 million Transformative Research Projects Award from the National Institutes of Health with mechanical engineering professor Adela Ben-Yakar, to develop just such an automation process for parkinsonian worms as well as worms mutated to have other neurodegenerative diseases, including a C. elegans version of Alzheimer’s.

“These worms are so simple to work with, we can do these drug screens at massive scale,” says Pierce-Shimomura. “Right now the more hands we have, the more targets we can test.”