The study was conducted by R. Edward Hendrick, Ph.D., clinical professor of radiology at the University of Colorado School of Medicine, and Mark Helvie, M.D., director of breast imaging at the University of Michigan Comprehensive Cancer Center. It appears in the February issue of the American Journal of Roentgenology. 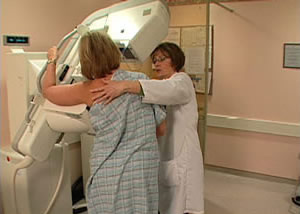 The difference between these two screening strategies comes down to 71 percent more lives saved with yearly screening beginning at 40.

“Task force guidelines have created confusion among women, leading some to forego mammography altogether. Mammography is one of the few screening tools that has been proven to save lives and our analysis shows that for maximum survival, annual screening beginning at 40 is best. This data gives women more information to make an informed choice about the screening schedule that’s best for them,” says Helvie, professor of radiology at the U-M Medical School.

As part of their recommendation, the task force emphasized the potential harms mammography can cause – including pain during the screening exam and anxiety from false-positives, which can lead to additional imaging or biopsy.

Breast cancer statistics: 209,060 Americans will be diagnosed with breast cancer this year and 40,230 will die from the disease, according to the American Cancer Society