A Neptune-sized exoplanet orbiting a small star about 33 light years away could be a key stepping stone on the path to making sense of an Earth twin.

The finding is the latest advance in the quest to measure Earth-like planets that could possibly host signs of life, which researchers expect to find in the next few years.

“GJ 436b is the smallest exoplanet whose direct light we’ve been able to measure”, said Kevin Stevenson, the University of Central Florida’s first planetary sciences doctoral student and lead author of the study.

The results are surprising. Neptune-sized planets as hot as 800 Kelvin – about 1,000 degrees Fahrenheit – should  contain high levels of methane and very little carbon monoxide, according to standard chemistry.

Instead the researchers found 7,000 times less methane that expected and plenty of carbon monoxide, which suggests that scientists should be more flexible in their theories about the atmospheres of similar planets.

“This is unexpected”, said UCF Physics Professor Joseph Harrington. “It’s like dipping bread into beaten eggs, frying it and getting oatmeal“. Stevenson and Harrington worked alongside colleagues from UCF, the Massachusetts Institute of technology, Columbia University and NASA.

Using NASA’s Spitzer Space Telescope, the UCF team measured the dimming of light as GJ 436b passed behind its star and re-emerged. The difference in the two light levels – measured six times at different infrared wavelengths – represents the light emitted by the planet itself. 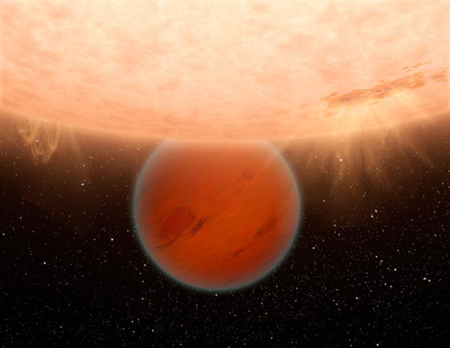 About the above image: An unusual, methane-free world is partially eclipsed by its star in this artist’s concept. NASA’s Spitzer Space Telescope has found evidence that a hot, Neptune-sized planet orbiting a star beyond our sun lacks methane – an ingredient common to many planets in our own solar system. Source: NASA

The resulting data were used to figure out what molecules make up the planet’s atmosphere. To do this, MIT Planetary Sciences Professor Sara Seager and postdoctoral researcher Nikku Madhusudhan simulated millions of chemical mixes under the planet’s conditions to find the ones that best matched the UCF data.

The unexpected result puts GJ 436b in good company. “If you were looking at Earth from afar, you would be surprised to see oxygen gas in its atmosphere”, Harrington said. “Oxygen reacts with surface materials and other gases, so you need something that continually produces it”.

That something is Earth’s abundant plant life. Oxygen is a “biosignature”, or an indicator of life, Harrington says.

Using similar techniques to that of the UCF study, astronomers will seek oxygen and other biosignatures on habitable worlds that they soon expect to discover.

“We’ll keep pushing the frontier, and this is just one more step in that direction”, Stevenson said.

*the post is written by – Christine Dellert, University of Central Florida (UCF)