COLLEGE PARK, Md. – The deadly, coordinated terror strikes in London five years ago – the 7/7 transit attacks – reflect emerging global trends, reports the National Consortium for the Study of Terrorism and Responses to Terrorism (START), based at the University of Maryland.

These trends include the rise in the number of new terror groups and a continued drop in the number of coordinated attacks, which are usually far more lethal. The report is based on START’s unclassified Global Terrorism Database, the most comprehensive of its kind in the world.

“This emergence of new groups, with no past history of terrorist attacks, is a discernible global trend in this decade,” the START report says. “This trend is similar to peaks evident in the late-1980s – an era of high levels of terrorist activity.” 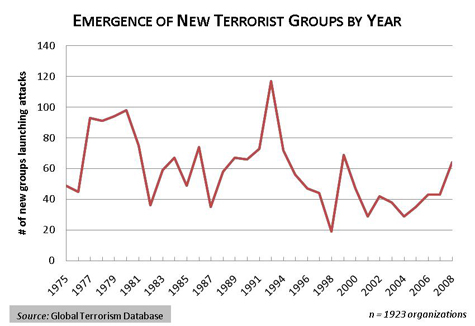 About the image above: Emergence of new terrorist groups by year. Image credit: University of Maryland.

COORDINATED TERROR ATTACKS: Because of the sophistication involved, coordinated attacks, such as those in London five years ago, have always represented a small portion of all terrorism, but the rate has been declining from the previous decade.

Relatively rare in the 1970s and early 1980s (up to 10 percent of all attacks), this figure doubled a few years later, peaking at 30 percent in 1998. There has been a steady decline ever since.

Still the coordinated terror attacks in the 21st century have been both lethal and notable, including the 9/11 attacks, Bali nightclub bombings in 2002, Madrid 2004, 7/71 London attacks in 2005 and the armed assaults in Mumbai in 2008. On average, coordinated attacks are 44 percent more lethal than uncoordinated ones. 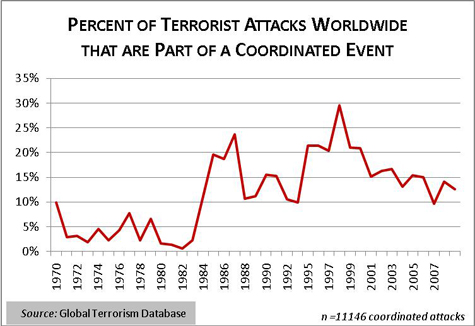 About the image above: Percent of terrorist attacks worldwide that are part of a coordinated event. Image credit: University of Maryland.

SUICIDE ATTACKS: The new START analysis reports a modest drop in suicide attacks globally in 2008 (191 such attacks, the latest data available), after rising in recent years. Still, this number is “well above average.”

The 7/7 attacks were Great Britain’s first to involve suicide bombers, and the only successful such attacks there to date.

IDEOLOGICAL VARIATION: “Emergent organizations today do not reflect one ideology, but rather, there are new groups representing a wide array of ideological beliefs and particular goals, complicating counterterrorism and anti-terrorism efforts in countries around the world,” the START researchers find.

The START report is based on analysis of its Global Terrorism Database (GTD) – the world’s most comprehensive unclassified database. It includes details on more than 87,000 terror incidents from 1970 to 2008. Figures for 2009 are presently being collected and coded. The GTD is publicly accessible online.

In 2005, terrorists launched a coordinated attack against London’s transportation system with three bombs detonating simultaneously at three different Metro stations and a fourth bomb exploding an hour later on a city bus. In all, there were 52 victims in these bombings with an additional 700 injuries resulting. The four terrorists who executed the attacks were killed in the explosions.

The complete START report is available online as a pdf.