*Q & A: Dr. Michael Freedman discusses his past accomplishments and current pursuits to build a quantum computer.*

Santa Barbara, Calif. – Mountain climbing is all about testing and pushing limits. But it’s not enough to rely on physical strength and stamina alone. To conquer a mountain, one must also possess the mental toughness and problem-solving skills needed to navigate difficult, potentially dangerous, terrain.

Microsoft Technical Fellow Michael Freedman knows a thing or two about conquering mountains — both in the physical and scientific worlds. Now, along with an impressive team of mathematicians and physicists he’s assembled, Freedman is putting his mind to work on an intellectual Mt. Everest — building a quantum computer. If successful, he and his team could create the most powerful computing device the world has ever known.

Born in Los Angeles, Freedman attended the University of California, Berkeley for just one year before leaving for graduate studies in mathematics at Princeton. In 1973, at age 22, he earned his Ph.D. and returned to Berkeley to teach.

In the mid 1970s, while a professor at the University of California, San Diego, Freedman worked on problem that had vexed mathematicians for nearly a century — a mystery first posed in 1904 by French mathematician Henri Poincaré. In 1981, after seven years of intense effort, Freedman finally cracked the code. Five years later, at age 36, he received math’s highest honor for the accomplishment —the prestigious Fields Medal. 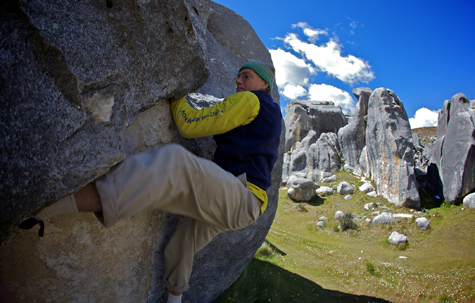 In 1997, Freedman left academia to join Microsoft Research’s Theory Group and pursue quantum topology and physics. Then, in 2004, he approached Chief Research and Strategy Officer Craig Mundie about forming a team at Microsoft to tackle the Holy Grail of information science: quantum computing.

Mundie upped the ante, telling Freedman he should not only build a Microsoft team, but also involve academics from around the globe. The result is Station Q — a small group of mathematicians and physicists Freedman recruited to join Microsoft, and an extended group of 50 or so experimentalists around the world who, together with Station Q, are undertaking the fundamental research necessary to build the first quantum computer.

Microsoft News Center recently spoke with Freedman about his past work and goals for the future.

News Center: What progress have you made since Station Q’s inception?

Freedman: We have identified materials that only exist at extremely low temperatures and have some very unusual properties. And we’ve spent the last five years improving our understanding of these materials and demonstrating that, in theory, they would be perfect for building a scalable quantum computer. There’s still a lot of experimentation that needs to happen, but we’re now on the verge of showing that one of these materials, under the right conditions, has the properties we’ve been looking for to build a quantum computer.

News Center: Station Q and its extended worldwide team met this past weekend. Were there any major breakthroughs that you can share?

Freedman: We shared a lot of progress on our current topological approach, but there was also a lot of excitement about some variant materials that may prove to be another avenue to build a quantum computer. We will be exploring both.

News Center: Do you expect to build a quantum computer in your lifetime, or are you laying the groundwork for the next generation of physicists and mathematicians?Freedman: Well, I’m very impatient. So I definitely want this done while I’m on the project. I don’t want to hand this off to someone else.News Center: That’s fair. After you build a quantum computer, how can it be used?

Freedman: Many of the famous applications are cryptographic. But that will be a footnote compared to the revolution in the design of complex materials. It’s very difficult to simulate the properties of any material — even something as simple as water. But, if you use a quantum computer to simulate a quantum system, these computations happen much, much faster. We think a quantum computer might be able to help design materials not yet invented, engineer exotic magnets, facilitate spintronics and advanced engineering and design pharmaceuticals.

News Center: Will there be other uses down the road?

Freedman: Sure, but the ones that will be most important are impossible to predict. It would be like asking someone in 1940 what we would be doing with computers in 2010. Many of the things we’ll use quantum computers for are beyond our imagination. But the fundamental power of a quantum computer is so great that we know they’ll have a broad scope.

News Center: You won the Fields Medal for solving a problem that had been around for close to a century. How did it feel to figure out such a tough problem?

Freedman: Well, mine was the last in a series of incremental steps toward a solution. One hundred years ago, no one had any idea how to solve these problems. It’s not like, after 100 years, a lone researcher solves a problem this big. It’s more that the community’s knowledge and understanding grows to a certain point, and then someone pulls it all together, comes up with a new idea, and puts these combined efforts over the finish line.

News Center: Taking on math and physics problems of that magnitude would be enough to drive some people completely mad.

Freedman: Actually, there’s a lot of peace in thinking through a problem. It’s reassuring for me to know that a quantum reality exists under everything. It somehow relieves me of existential angst.

News Center: Do you find this same peaceful feeling anywhere else?

News Center: How so?

Freedman: If you are climbing alone, or are the lead climber in a group, you have the responsibility of figuring out what path to take and where to place your hands, feet and gear. It’s kind of stressful at first, but when you‘re experienced, it becomes completely Zen-like and tranquil. At its best moments, doing math and physics gives me the same feeling.

News Center: Where do you think your gift for mathematics comes from? Were your parents good at math?

Freedman: Well, my dad was a bit of a math prodigy. He was admitted to Columbia University when he was only 13, but had to leave school before graduating to earn money and support his family. So he got a job writing jokes for Broadway shows and radio programs. During World War II, he moved to California and took a job as an aeronautical engineer at Hughes Aircraft. He actually met Howard Hughes. But he didn’t stop writing. So he designed the tail section of the “Spruce Goose” during the day, and wrote radio comedy scripts at night. It was always humbling to be around my father because there was no intellectual task he found daunting.

News Center: And your mom?

Freedman: She isn’t mathematical at all. She was a dancer who later became a novelist and a painter. So she’s an artist.

News Center: Do you see art in mathematics?

Freedman: Oh, sure. Part of mathematics is of course being able to understand formulas and computation. But there’s a symphonic element to mathematics as well. You want to understand how the whole thing sounds, how it flows, where it’s going… that kind of thing. To keep yourself from getting lost in the details, you really need to have an artist’s sense of direction.

News Center: You’re regarded as one of the most brilliant mathematical minds in the world. Is there anything you don’t do well, but wish you could?

Freedman: I wish I had a better musical sense. I have a sister who’s an opera singer, but I often wonder what gene I’m missing that prevents me from creating music myself. If I could add any one thing to my life, I’d like to be able to play rock guitar.

News Center: Set the hardcore math and physics aside and concentrate on “6-String Theory” for a while?

***What Is Quantum Computing?

Quantum computing is a field of research that applies the principles of quantum physics to building more efficient computers and studies the algorithms that such computers can execute.

In a conventional computer, transistors store bits of information, and each bit has a value of either 1 or 0. Turn a transistor on, for instance, and it represents a 1. Turn it off and it holds a 0. With a quantum computer, the classical bit gives way to something called a quantum bit, or qubit.

A qubit is not stored in a transistor but in some quantum mechanical state such as a photon polarization, electron spin, or in even more exotic degrees of freedom. According to the superposition principle of quantum mechanics, at any given moment the spin of an electron can be both up and down with specified “amplitudes.” Amplitudes are the key because they represent the square roots of probabilities. Put qubits together and they can hold a combination of 2^n values with arbitrary amplitudes.

A quantum computer’s ability to manipulate amplitudes can make it exponentially faster than traditional computers — fast enough, for instance, to crack today’s most secure encryption algorithms.

For some problems, quantum computers will be no faster than conventional computers. But for certain types of problems, like searching databases, breaking cryptographic codes, or simulating very large, complex physical systems, quantum machines would be dramatically faster than any possible classical computer.***

*Special thanks to – Microsoft.