*Hardware acceleration for snappy performance and a focus on the Web highlight how Microsoft’s new Internet Explorer 9 beta delivers a better experience for both users and developers.*

SAN FRANCISCO – Sept. 15, 2010 – Microsoft today released a beta version of Internet Explorer 9 (IE9) and introduced consumers to its vision of site-centric browsing and the promise of a more beautiful Web.

At a launch event in San Francisco, Microsoft announced that the IE9 beta is now available in 33 languages worldwide for download. With a simple user interface that masks new technical muscle and all-around fast performance, the new browser is designed to take a backseat and bring forward the full beauty of the websites and applications people care about, says Dean Hachamovitch, Microsoft’s corporate vice president for Internet Explorer.

“The Web is about sites, and your browser should be, too,” Hachamovitch says. “IE9 puts you and your site at the center of the browser experience.”

Starting today, tech-savvy consumers can download the beta of IE9 and test drive the new browsing experience at some of the Web’s most popular sites. At the “Beauty of the Web” event in San Francisco, more than 70 top sites and global brands showcased new sites and Web-based applications they have built to take advantage of the new capabilities IE9 offers. Sites such as Facebook, Twitter, MySpace and LinkedIn, and global brands such as Quiksilver, Red Bull, Livestrong and Amazon are showcasing experiences that take advantage of IE9’s ability to tap into the power of the whole PC and modern standards such as HTML5 to offer rich immersive experiences, and to integrate sites seamlessly with Windows 7. “When you add up all these sites, today over 800 million visitors – or two-thirds of active internet users – have a better Web on Windows experiences enabled today by IE9,” says Ryan Gavin, senior director of Internet Explorer. 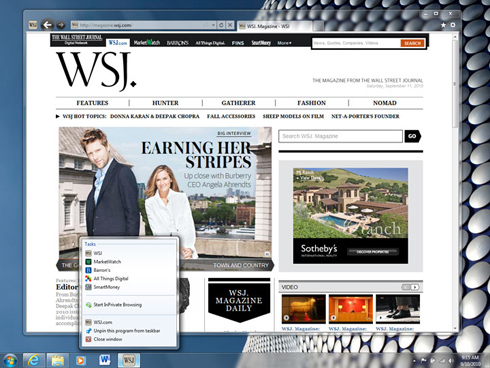 About the image: WSJ. Magazine, a part of The Wall Street Journal’s Digital Network, is one of the top brands that plans to use IE9 to bring digital content to life. Image credit: Microsoft

These sites, which customers can discover by visiting www.BeautyoftheWeb.com, mark a new era in browsing, where websites will increasingly look, feel and perform more like Windows applications, Gavin says.

Several new features deliver those new Web experiences while also keeping the focus on the websites themselves. First and foremost, IE9 is all-around fast – faster than IE8, something that improves the user’s overall PC experience, not just on the traditional measure of page load time.

The focus on making website content shine is seen right in IE9’s clean user interface, Hachamovitch says. By default, only the controls essential for browsing show up in the browser frame. That means less screen real estate is taken up by the browser, enabling people to see and experience more of what sites have to offer. “When we designed the IE9 interface, we wanted the frame to say ‘Look at the site,’ not ‘Look at the browser,’” Hachamovitch says.

IE9 takes advantage of many features that will be familiar to Windows 7 users to keep the focus on content rather than the browser and make websites feel more like apps. For example, users can pin their favorite sites right to the Windows 7 taskbar, meaning they can access their favorite content without first having to open the browser. Jump Lists let users quickly access common tasks such as sending an email, playing a song, or keeping tabs on breaking news. And fans of Windows 7’s Aero Snap feature will find it integrated into IE9, allowing them to quickly tear off tabs or place two sites side by side.

About the video: Wouldn’t it be great if your web sites and applications weren’t trapped in the browser? Internet Explorer 9 melts into the background bringing your sites forward and seamlessly integrates with Windows so that they are more like the applications you use every day on your PC.

In addition to pinning sites to the Windows 7 taskbar, IE9 also picks up website branding, providing another way for users to feel immersed in the content, Hachamovitch says.

Making IE9 work great on Windows 7 was a key goal for the IE team, says Gavin. “The No. 1 thing people do on their Windows PC is browse the Web,” he says. “Our responsibility is to make sure those customers have a fantastic experience with one of the most important aspects of their Windows experience.”

Microsoft is encouraging developers to see what’s new for them in IE9. The new browser gives them the ability to tap the power of PC hardware and improve all-around browsing performance. With IE9, Microsoft has shifted the rendering of graphics and text from the CPU to the computer’s graphics processing unit, or GPU. That means Web developers can take advantage of the power that Windows developers have been tapping for years. Hardware-accelerated text, video and graphics, combined with a new JavaScript engine, means that websites can perform more like applications installed directly on a Windows computer.

The Windows 7 features that have been rolled into IE9 will help developers build better experiences for people who visit their sites. “From the developer and partner point of view, I think sites are going to have a much better and closer relationship with visitors because they’ll be able to program Jump Lists and offer notifications to make the experience and connection so much better,” Hachamovitch says.

Starting today, more than 70 partners and sites that already are trying out IE9 go on display at beautyoftheweb.com. They include the top four social networking sites: Facebook, MySpace, LinkedIn and Netlog; Twitter, the world’s largest real time information network; the No. 1 sites for retail (Amazon), auction (eBay), and entertainment information (IMDB); the leading entertainment European entertainment network (RTL); and the top brand and portal in China (Sohu). Even individual music bands are represented, including British band Gorillaz, which participated in today’s release of the IE9 beta in the United Kingdom.

One developer, Kevin Schreiner of R2Integrated, worked with Scientific American on an interactive site called Brain Power, where users of all ages can learn more about the brain. He says that new HTML5 tools in IE9 will help developers deliver a whole new browsing experience. “Essentially I think we have finally made it out of the document age of browsers,” he says. “In the old days, you developed Web pages that were just documents. Now, you can build really compelling environments, which is much cooler.”

Aron Schoppert and Josh Santangelo of Stimulant gave the world a sense of IE9’s technical muscle through WebVizBench, an HTML5 benchmark they built for the IE9 launch. Their benchmark measures what can be done with a browser that taps into the GPU, they say, and demonstrates how powerful IE9 is.

“Competing browsers that advertise hardware acceleration in their betas reach only half the frame rate and have a much poorer user experience,” Schoppert says. “Users with low-end computers can upgrade their video card and have the experience be equivalent to buying a new computer with the results we are seeing with HTML5 Canvas and IE9. I think with HTML5 and what IE9 is doing, it’s going to change the way the Web is viewed.”

The journey to showcase Microsoft’s IE9 partners in San Francisco has been underway ever since Internet Explorer 8 shipped in March 2009, Hachamovitch says. At the time, the browser competition was heating up and Microsoft’s share of the browser market had fallen. But competition is never a bad thing for innovation, Gavin says. “With IE8, we have been talking to customers about our industry-leading focus on security, privacy and reliability, and that is something that got a positive response,” Gavin says. “As a result of that conversation and a quality product, IE8 is not only the fastest-growing browser in history, it’s the No. 1 browser across all operating systems.”

Still, with IE losing overall share to competitors, the team looked at data that came from both inside and outside the company to see how it could do a better job with the next version of IE. The data they got back was humbling, Hachamovitch says, and they took it to heart. The team started to design their plan for IE9 around a few basic themes. First, it had to get faster. Second, they wanted to make the browsing experience and Windows better together. The third theme revolved around trust, meaning the browser had to focus on safety, reliability and privacy.

The result is IE9, a browser that transforms the capabilities of the Web, Hachamovitch says. And while Microsoft will wait and see how consumers respond, the team has already received positive feedback from developers. During the development phase of building IE9, Microsoft worked hard to reach developers. Starting with MIX10, the company released a new version of the beta every eight weeks through its developer platform preview. To date, the IE9 platform previews have been downloaded more than 3 million times.

Hachamovitch believes that consumers will be drawn to the new browsing experience that IE9 offers, one that steps aside for the beauty of the Web.

“At the end of the day, it’s about the Windows customer experience and what we can do to enable the Web to take a step forward,” Hachamovitch says. “It’s not the browser that’s important to people, but the Facebooks and the Hotmails, the sites that deliver the content they really care about. Our job is to make sure that we’re doing a great job not only with how developers create those experiences, but changing how our customers experience them.”