Engineers at Yale University have developed a new, highly efficient technique for separating, sorting, and concentrating synthetic microscopic particles within complex fluids based on size.

“We developed a technique that can sort thousands of microparticles into separate, focused streams simultaneously using magnetic fields,” said Yale scientist Hur Koser, the senior author of a paper published online Nov. 11 in the journal Lab-on-a-Chip. “I am already applying this technology to sort and isolate live, rare cells from complex samples, such as whole blood.” 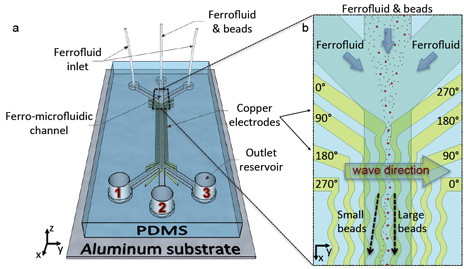 The ability to arrange and channel microparticles and live cells quickly and efficiently could improve many processes involving isolation and purification of target cells. Existing techniques are typically expensive, labor-intensive, and time-consuming.

“The technology is an ideal platform to find the proverbial needle in a haystack quickly and with minimal labor,” Koser said.

“You don’t have to attach anything that acts as a label to your particles,” said Koser, associate professor of electrical engineering at the Yale School of Engineering & Applied Sciences. “It’s much simpler and much faster.”

The key element in the new technique is a magnetic liquid medium, or ferrofluid, which allows the beads to be manipulated using programmable magnetic fields. By carefully engineering the magnetic field pattern, Koser and Kose were able to trap or clear the beads based on their size.

“It is like the buoyancy of an air bubble under water,” says Koser. “Gravity attracts water down, and the displaced air bubble is pushed up. In our case, we generate programmable magnetic fields that mobilize the magnetic nanoparticles, which in turn can both push and rotate the non-magnetic microparticles.”

The ferro-microfluidic cytometer can rapidly and continuously sort an incoming stream of the tiny beads into separate, focused streams of descending size.

Koser has begun work on a next-generation nanocytometer that can process more than 1 ml/minute of sample. He also is developing a device that can rapidly isolate rare bacteria for environmental testing, food safety, and clinical diagnostics.

Grants from the National Science Foundation, the National Institutes of Health and Yale University supported this work.