Women 16–49 at Risk of Multiple Pollutants

In a new analysis of thousands of U.S. women of childbearing age, Brown University researchers found that most exceeded the median blood level for two or more of three environmental pollutants that could harm brain development of fetuses and babies: lead, mercury, and polychlorinated biphenyls (PCBs).

PROVIDENCE, R.I. [Brown University] — Nearly 23 percent of American women of childbearing age met or exceeded the median blood levels for all three environmental chemical pollutants — lead, mercury, and PCBs — tracked in an analysis of data on thousands of women by Brown University researchers. All but 17.3 percent of the women aged 16 to 49 were at or above the median blood level for one or more of these chemicals, which are passed to fetuses through the placenta and to babies through breast milk.

The study, published in advance online Nov. 15 in the journal Environmental Research, identified several risk factors associated with a higher likelihood of a median-or-higher “body burden” for two or more of these chemicals.

The three pollutants are of greatest interest because they are pervasive and persistent in the environment and can harm fetal and infant brain development, albeit in different ways, said study lead author Dr. Marcella Thompson. But scientists don’t yet know much about whether co-exposure to these three chemicals is more harmful than exposure to each chemical alone. Most researchers study the health effects of exposure to an individual chemical, not two or three together.

“Our research documents the prevalence of women who are exposed to all three of these chemicals,” said Thompson, who began the analysis as a doctoral student at the University of Rhode Island College of Nursing and has continued the research as a postdoctoral research associate for Brown University’s Superfund Research Program with co-author Kim Boekelheide, professor of pathology and laboratory medicine. “It points out clearly the need to look at health outcomes for multiple environmental chemical co-exposures.”

Most of the childbearing-age women — 55.8 percent — exceeded the median for two or more of the three pollutants. 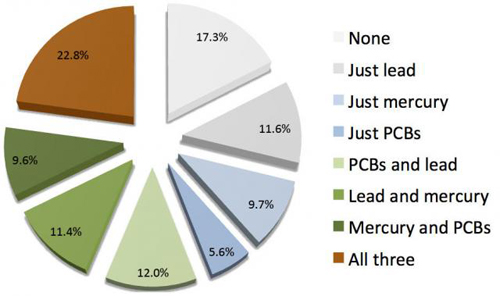 The body burden of multiple pollutants. In a recent study, more than half of women of childbearing age had median or higher levels of at least two of three pollutants that could harm brain development. Image credit: Brown University

Data were collected between 1999 and 2004 from 3,173 women aged 16 to 49 who participated in the Centers for Disease Control and Prevention National Health and Nutrition Examination Survey (NHANES). The survey was designed to represent the national population of 134.5 million women of childbearing age. Because the original study also elicited a wide variety of information on health behaviors, socioeconomic and demographic characteristics, Thompson and Boekelheide were able to identify specific risk factors associated with increased odds of having higher blood levels of lead, mercury, and PCBs.

They found several statistically significant risk factors. The most prominent among them was age. As women grew older, their risk of exceeding the median blood level in two or more of these pollutants grew exponentially to the point where women aged 30 to 39 had 12 times greater risk and women aged 40 to 49 had a risk 30 times greater than those women aged 16 to 19.

Thompson said women aged 40 to 49 would be at greatest risk not only because these chemicals accumulate in the body over time, but also because these women were born in the 1950s and 1960s before most environmental protection laws were enacted. 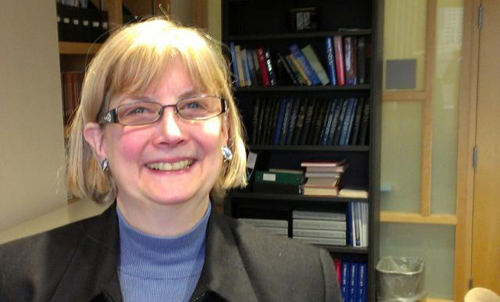 Marcella Thompson. “We carry a history of our environmental exposures throughout our lives.” Image credit: David Orenstein/Brown University

Fish and heavy alcohol consumption also raised the risk of having higher blood levels. Women who ate fish more than once a week during the prior 30 days had 4.5 times the risk of exceeding the median in two or more of these pollutants. Women who drank heavily had a milder but still substantially elevated risk.

Fish, especially top predators like swordfish and albacore tuna, are known to accumulate high levels of mercury and PCBs, Thompson said. However, there is no known reason why they found a statistically higher association between heavy drinking and a higher body burden of pollutants.

One risk factor significantly reduced a woman’s risk of having elevated blood levels of the pollutants, but it was not good news: breastfeeding. Women who had breastfed at least one child for at least a month sometime in their lives had about half the risk of exceeding the median blood level for two or more pollutants. In other words, Thompson said, women pass the pollutants that have accumulated in their bodies to their nursing infants.

Although the study did not measure whether women with higher levels of co-exposure or their children suffered ill health effects, Thompson said, the data still suggest that women should learn about their risks of co-exposure to these chemicals well before they become pregnant. A woman who plans to become pregnant in her 30s or 40s, for example, will have a high relative risk of having higher blood levels of lead, PCBs, and mercury.

“We carry a history of our environmental exposures throughout our lives,” Thompson said.

The National Institute of Environmental Health (grant P42-ES013660), the Graduate School of the University of Rhode Island, and Sigma Theta Tau (the International Nursing Honor Society) supported the research.