The Search for the Earliest Signs of Alzheimer’s

For the past five years, volunteers from the City of Berkeley and surrounding areas have come to Lawrence Berkeley National Laboratory to participate in an ongoing study that’s changing what scientists know about Alzheimer’s disease.

The volunteers, most over the age of 70, undergo what can best be described as a brain checkup. They’re asked to solve puzzles and memorize lists of words. Magnetic resonance imaging (MRI) scans image the structure of their brains in exquisite detail. Functional MRI scans allow scientists to watch portions of their brains light up as they form memories. And Positron emission tomography (PET) scans measure any accumulation of beta-amyloid, a destructive protein that’s a hallmark of Alzheimer’s.

The goal of the Berkeley Aging Cohort Study is to reveal how our brains change as we age. The scientists also compare their findings with brain scans of Alzheimer’s patients.

They’ve noticed something odd—and perhaps a little hopeful. Some volunteers have the same level of beta-amyloid deposition as an Azheimer’s patient. Yet they show no signs of the disease.

Why is this? How can two people, the same age and with the same signs of the disease, take such different paths?

“It turns out that Alzheimer’s is more complicated than we thought,” says William Jagust, a faculty senior scientist in the Berkeley Lab’s’s Life Sciences Division who also has appointments at UC Berkeley’s School of Public Health and the Helen Wills Neuroscience Institute. 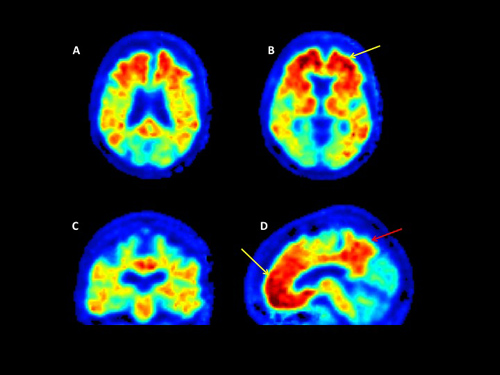 These PET images show the uptake of a radiotracer called C-11 PIB. Images A and B are in a horizontal plane, C is a vertical slice of the front of the brain, and D is from the side. The reformatting of these planes allows precise localization of the uptake of the tracer. Hotter colors indicate greater uptake consistent with deposition of beta-amyloid in the frontal lobes (yellow arrow in B and D) and the medial parietal lobe (red arrow in D). (Image credit: Jagust Group)

Jagust heads a team that conducts the cohort study, which so far includes about 80 volunteers, with more to come. Their research has put them at the forefront of a more nuanced take on Alzheimer’s.

“Until recently, we thought the more amyloid accumulation in the brain, the greater the chance of developing the disease” says Jagust. “But we now believe that amyloid unleashes a chain of events that may or may not cause Alzheimer’s.”

It’s well known that many normal, older people have some beta-amyloid deposits in their brain. It’s also likely true that people with beta-amyloid have a greater risk of cognitive decline and Alzheimer’s.

But the picture gets cloudy from there. Jagust’s group has found structural and functional changes in the brains of healthy people that are associated with beta-amyloid. Some of these changes may be a prelude to Alzheimer’s.

And some changes may be signs that a person is actually resisting this path. 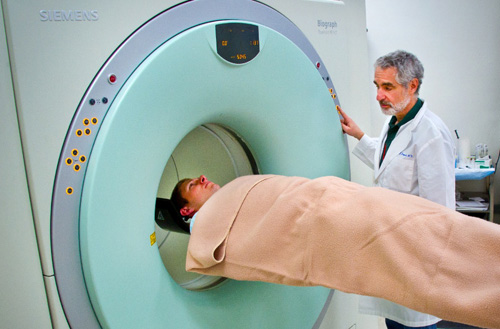 In a recent study, Jagust and colleagues asked people to commit pictures to memory while they watched their brain activity with functional MRI. Normal people with beta-amyloid deposition showed more—not less—activity than people without beta-amyloid. One possible interpretation for this heightened activity is that it enables memory formation despite the presence of beta-amyloid. Their brains are working harder.

Or perhaps cognitive decline is most closely associated with changes in brain structure. In another study, Jagust’s team found that the more beta-amyloid plaque in a person’s brain, the more a person is likely to have a smaller hippocampus, which is the part of the brain that forms new memories. They also found that someone with this damage is more likely to have impaired memory. 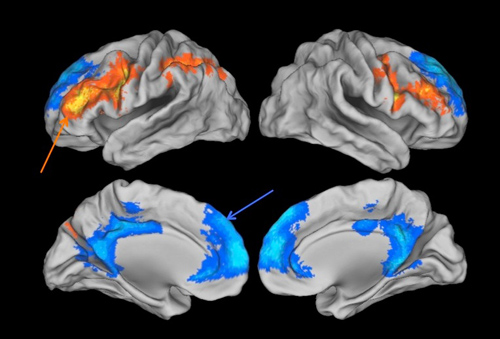 These images were obtained using functional MRI scans taken as cognitively normal people performed tasks that required them to pay attention to changing stimuli. Yellow/orange regions indicate brain areas that become active during the task. Blue regions become less active during the task. In people with evidence of beta-amyloid in the brain, these areas of deactivation are abnormal, meaning they don't fully deactivate. (Image credit: Bill Jagust's group)

This research will help scientists determine how this constellation of events—beta-amyloid deposition, changes in brain function, hippocampus atrophy—contributes to Alzheimer’s.

The search for the earliest signs of the disease has gained importance in recent years as pharmaceutical companies work to develop drug therapies that are designed to block the deposition of beta-amyloid.

“There is a strong belief that Alzheimer’s must be treated very early, before symptoms appear, in order to be effective,” says Jagust. “We know that amyloid leads to negative consequences in the brain. We now need to determine how to stop these effects before they happen.”