Today, delicacies like capers, arugula and fennel are at home at Dean & Deluca, Whole Foods and fancy restaurants, but they haven’t always lived the high life.

These and other darlings of the foodie set started out as peasants’ fodder, foraged from rocky outcroppings, empty fields and roadsides, according to a new book by a UCLA professor.

Luigi Ballerini revisits this distant past in “A Feast of Weeds: A Literary Guide to Foraging and Cooking Wild Edible Plants” (University of California Press), which celebrates the foraged foods that are currently enjoying a renaissance in Italy and elsewhere.

“What was once scorned for belonging to the poor and rural has become fashionable among the 1 percent,” said Ballerini, a professor emeritus of Italian.

Each of the book’s 31 chapters is devoted to how we came to eat and cultivate a single ingredient, such as chicory, mallow or chamomile. Ballerini traces the influence these wild edibles have had on not just gastronomy but art, literature, music, philosophy, mythology, religion and even medicine.

Who knew that the Greek word for bay leaf or laurel is “Daphne,” after the nymph in Greek mythology whose father turned her into a laurel tree to thwart unwanted advances by the god Apollo? Or that the word “marathon,” a legendary 490 B.C. long-distance race that started from a field overflowing with wild fennel, comes from the Greek for “fennel field.” Or that the herb mint gets its name from the nymph Minthe who, according to Greek mythology, was turned into a plant by Persephone because she was jealous of the attention her husband, Hades, was showing the young beauty?

Making such connections is easy for Ballerini. Having hosted a television series on the history of Italian cuisine, edited a series of centuries-old cookbooks from Europe and translated two landmark Italian cookbooks into English, the Milan native has earned a reputation as one of the world’s foremost authorities on the long and colorful culinary history of his homeland.

In addition to courses in contemporary Italian literature and poetry, Ballerini teaches a popular UCLA undergraduate course on Italian gastronomy, which explores Italian social history through the lens of food and conviviality. He splits his time between Los Angeles, New York and Milan.

For “A Feast of Weeds,” the scholar scoured legends, myths and lore from sources as disparate as ancient Egypt and Fats Domino — though in Italy wild blueberries are more likely to find their way into grappa than onto hills, he jokes.

In addition to the rich history surrounding foraged plants, Ballerini provides recipes for preparing them all’italiana. 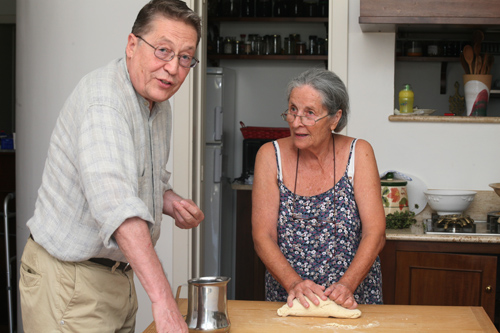 Ever wonder how to make borage flower fritters, blackberry shoot salad or bay leaf liquor? This is the book for you. Ballerini also describes how to introduce pretty daisies into risotto, pickle the onion-like cipollini and transform the tough succulent portulaca into a tasty salad.

He got the idea for the book after being served a type of soup he didn’t recognize while vacationing in southern Italy. His jaw dropped after the cook, a longtime friend of his wife, revealed the key ingredient.

“I said, ‘Poppy leaves?!'” he recalled, still incredulous. “It was so good I couldn’t believe it.”

The book’s 135 recipes were adapted from the personal repertoire of that cook, a resident of the seaside village of Otranto — on the heel of Italy’s “boot.” Today she is a well-to-do landowner, but Ada De Santis grew up poor, the oldest of five children raised single-handedly by a poor, widowed farmer.

“This peasant housewife has brought cooking with wild greens to perfection,” Ballerini said of De Santis. “In fact, she cooks better than most celebrity chefs. But her family once ate foraged food to merely survive.”

Originally published in Italy, the book has been translated from Italian by Gianpiero W. Doebler, a former student of Ballerini at UCLA. 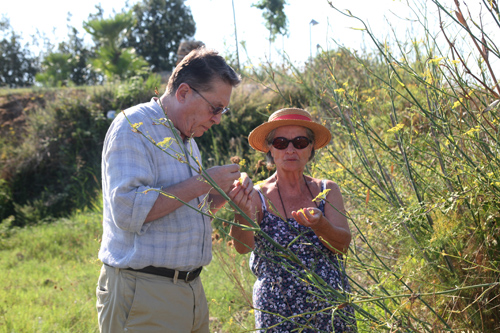 Ballerini concedes that few American cooks need a book to sell them on the culinary riches of wild blackberries, wild mint or wild asparagus. Still, Italians don’t put the tasty treats to the same use an American might. Witness blackberry semifreddo (a kind of rice pudding served cold with fruit), fried anchovies with mint, and wild asparagus risotto — to name just a few of the featured recipes.

So much for the low-hanging fruit. Ballerini also rises to the defense of the kind of weeds that, well, gave weeds a bad name.

“Either eat this wartycabbage or jump from the window,” is one of many unfortunate sayings that have dogged the winter plant, which used to be considered the last resort of the desperately poor, Ballerini says. But with just the right amount of extra virgin olive oil and salt, the green that looks like a dandelion and tastes like broccoli rabe or mustard greens can become a savory centerpiece in a spaghetti sauce or frittata, he writes.

“Today, eating crested wartycabbage is no longer an indicator of indigence, because the rich are finally discovering how refined the tastes of the poor were,” he said.

Other unlikely treats featured in “Feast of Weeds” include nettles, which have a spinach-like or cucumber-like flavor; sow thistle, which tastes like escarole or Swiss chard; and myrtle berries, which have slightly peppery taste, with hints of rosemary.

While he stops short of supplying actual dosages, Ballerini does delve into the medicinal properties that have been attributed over the years to these plants. Had Viagra existed in Ovid’s day, the poet might have recommended cipollini for men whose prescriptions were running low. Mallow is an excellent laxative, the 17th-century English writer John Evelyn insisted. Pliny hailed asparagus water as a cure for poisonous snakebites, among other things.

“Most of what has been said through the centuries is bogus,” Ballerini said with a hearty laugh. “You don’t want to do what they say. You’d die immediately.”

The food historian nevertheless describes dozens of dubious remedies out of deference to the roots of medical science. “Medicine originated as gastronomy,” he said. “If you had certain ailments, you were often advised to eat certain things.”

Compared to these potions and elixirs, the book’s recipes have much more relevance for contemporary readers, even those far from Italy. A botanist who reviewed the book for UC Press determined that some 80 percent of the featured plants can be found in California, and all of them somewhere in the United States. Ballerini has seen wild fennel growing in Southern California’s Topanga Canyon and Point Mugu. Other edibles that can be foraged in the wilds of Southern California include blackberries, dandelions and sow thistle. Meanwhile, in Northern California’s Santa Clara County, Ballerini has seen immigrants foraging for wild asparagus and blackberry buds.

He nonetheless concedes that California foragers may have better luck stumbling upon strawberry tree, thyme, borage and other stars of “A Feast of Weeds” in a neighbor’s yard than in the wild. “Many of these plants are grown as ornamentals in the United States, particularly in California,” he explained.

So long as they don’t actually damage the plant, the adventuresome should feel no compunction, Ballerini believes, about helping themselves to the makings for black locust flower fritters, prickly pear risotto and portulaca frittata, to name a few of the dishes that can be prepared with ornamentals commonly found in Southern California yards. Still, nothing beats rustling up dinner far from civilization, Ballerini insists.

“Once you taste greens that you plucked from the field, you’ll never go back — or do so with great regret,” he said. “The taste of what you get at the market is nothing compared to what wild weeds really taste like.”