ANN ARBOR, Mich.— The solar wind sandblasts the surface of planet Mercury at its poles, according to new data from a University of Michigan instrument on board NASA’s MESSENGER spacecraft.

The sodium and oxygen particles the blistering solar wind kicks up are the primary components of Mercury’s wispy atmosphere, or “exosphere,” the new findings assert. Through interacting with the solar wind, they become charged in a mechanism that’s similar to the one that generates the Aurora Borealis on Earth.

The findings are published in the Sept. 30 edition of Science.

The Fast Imaging Plasma Spectrometer (FIPS,) made by U-M scientists, has taken the first global measurements of Mercury’s exosphere and magnetosphere in an effort to better understand how the closest planet to the sun interacts with its fiery neighbor. The measurements confirmed scientists’ theories about the composition and source of the particles in Mercury’s space environment.

“We had previously observed neutral sodium from ground observations, but up close we’ve discovered that charged sodium particles are concentrated near Mercury’s polar regions where they are likely liberated by solar wind ion sputtering, effectively knocking sodium atoms off Mercury’s surface,” said FIPS project leader Thomas Zurbuchen, a professor in the Department of Atmospheric, Oceanic and Space Sciences and Aerospace Engineering at the U-M College of Engineering. 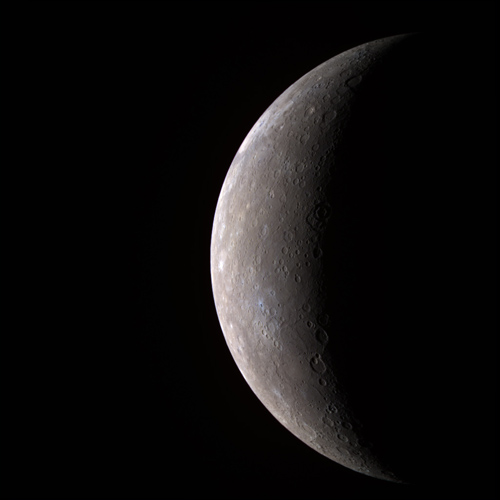 Planet Mercury as seen from the MESSENGER spacecraft in 2008. Image credit: NASA

Earth and Mercury are the only two magnetized planets in the solar system, and as such, they can somewhat deflect the solar wind around them. The solar wind is a squall of hot plasma, or charged particles, continuously emanating from the sun. Earth, which has a relatively strong magnetosphere, can shield itself from most of the solar wind. Mercury, which has a comparatively weak magnetosphere and is 2/3 closer to the sun, is a different story.

“Our results tell us is that Mercury’s weak magnetosphere provides very little protection of the planet from the solar wind,” Zurbuchen said.

“We’re trying to understand how the sun, the grand daddy of all that is life, interacts with the planets,” said Jim Raines, FIPS operations engineer and doctoral candidate at U-M. “It is Earth’s magnetosphere that keeps our atmosphere from being stripped away. And that makes it vital to the existence of life on our planet.”