The ALPHA Collaboration, an international team of scientists working at CERN in Geneva, Switzerland, has reported storing a total of 309 atoms of antihydrogen, some for up to 1,000 seconds (almost 17 minutes), with an indication of much longer storage time as well.

ALPHA announced in November, 2010, that they had succeeded in storing antimatter atoms for the first time ever, having captured 38 atoms of antihydrogen and storing each for a sixth of a second. In the weeks following, ALPHA continued to collect anti-atoms and hold them for longer and longer times.

Scientists at the U.S. Department of Energy’s Lawrence Berkeley National Laboratory (Berkeley Lab) and the University of California at Berkeley, including Joel Fajans and Jonathan Wurtele of Berkeley Lab’s Accelerator and Fusion Research Division (AFRD), both UC Berkeley physics professors, are members of the ALPHA Collaboration. 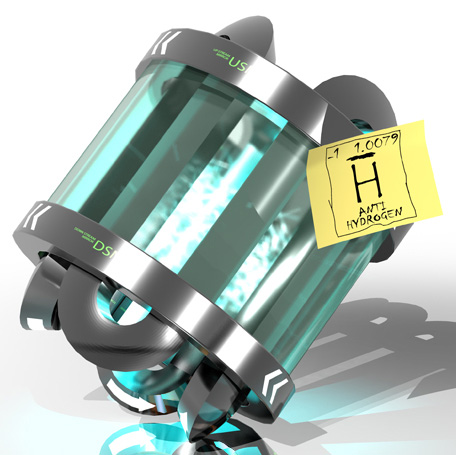 An artistic representation of the ALPHA neutral antimatter trap, suggesting the nature of the ALPHA apparatus as a container for antihydrogen. (Chukman So, copyright © 2011 Wurtele Research Group. All rights reserved.)

Says Fajans, “Perhaps the most important aspect of this result is that after just one second the antihydrogen atoms had surely already decayed to ground state. These were likely the first ground-state anti-atoms ever made.” Since almost all precision measurements require atoms in the ground state, ALPHA’s achievement opens a path to new experiments with antimatter.

A principal component of ALPHA’s atom trap is a superconducting octupole magnet proposed and prototyped in Berkeley Lab’s AFRD. It takes ALPHA about 15 minutes to make and capture atoms of antihydrogen in their magnetic trap.

“So far, the only way we know whether we’ve caught an anti-atom is to turn off the magnet,” says Fajans. “When the anti-atom hits the wall of the trap it annihilates, which tells us that we got one. In the beginning we were turning off our trap as soon as possible after each attempt to make anti-atoms, so as not to miss any.”

Says Wurtele, “At first we needed to demonstrate that we could trap antihydrogen. Once we proved that, we started optimizing the system and made rapid progress, a real qualitative change.” 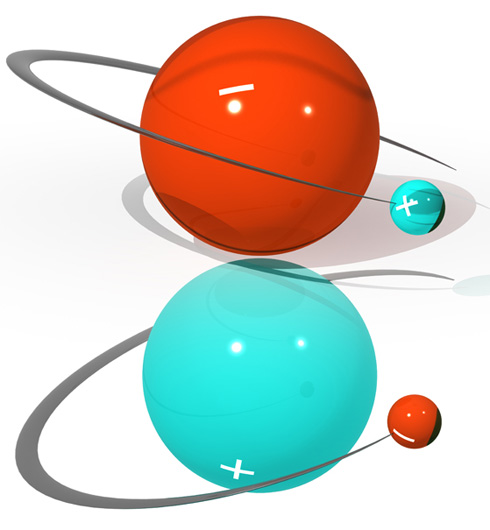 Initially ALPHA caught only about one anti-atom in every 10 tries, but Fajans notes that at its best, the ALPHA apparatus trapped one anti-atom with nearly every attempt.

Although the physical set-ups are different, ALPHA’s ability to hold anti-atoms in a magnetic trap for 1,000 seconds, and presumably longer, compares well to the length of time ordinary atoms can be magnetically confined.

“A thousand seconds is more than enough time to perform measurements on a confined anti-atom,” says Fajans. “For instance, it’s enough time for the anti-atoms to interact with laser beams or microwaves.” He jokes that, at CERN, “it’s even enough time to go for coffee.”

The ALPHA Collaboration not only made and stored the long-lived antihydrogen atoms, it was able to measure their energy distribution.

“It may not sound exciting, but it’s the first experiment done on trapped antihydrogen atoms,” Wurtele says. “This summer we’re planning more experiments, with microwaves. Hopefully we will measure microwave-induced changes of the atomic state of the anti-atoms.” With these and other experiments the ALPHA Collaboration aims to determine the properties of antihydrogen and measure matter-antimatter asymmetry with precision.

A program of upgrades is being planned that will allow experiments not possible with the current ALPHA apparatus. At present the experimenters don’t have laser access to the trap. Lasers are essential for performing spectroscopy and for “cooling” the antihydrogen atoms (reducing their energy and slowing them down) to perform other experiments.

Fajans says, “We hope to have laser access by 2012. We’re clearly ready to move to the next level.”

Details of the ALPHA method of creating and trapping antihydrogen atoms may be found in “Antimatter Atoms Successfully Stored for the First Time,” the 17 November 2010 Berkeley Lab news release, at https://newscenter.lbl.gov/news-releases/2010/11/17/antimatter-atoms/.