AUSTIN, Texas — The Harry Ransom Center, a humanities research library and museum at The University of Texas at Austin, has acquired a collection of materials from husband-wife duo actress Carlin Glynn and writer and director Peter Masterson relating to their careers and their work on the original Broadway production and film of “The Best Little Whorehouse in Texas.”

The collection consists of eight document boxes of materials, half of which relate to the 1978 musical. The musical was directed by Masterson, who also co-authored the book with Larry L. King. Carol Hall wrote the lyrics for the musical. The stage musical starred Glynn as Mona Stangley, the owner of a brothel in the fictional town of Gilbert, Texas. The show ran for more than 1,500 performances on Broadway, toured extensively and was adapted to film in 1982. 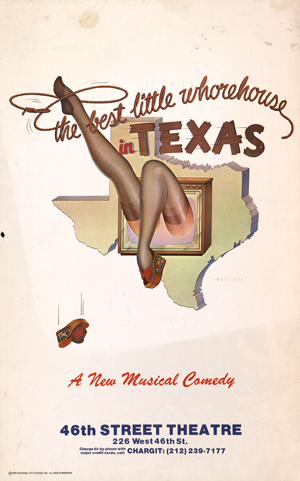 Lobby poster for Broadway production of "The Best Little Whorehouse in Texas." Image credit: The University of Texas at Austin

“We chose the Harry Ransom Center at The University of Texas at Austin to house our film and theatrical works and memorabilia, as so much of it is fueled by our Texas roots,” said Glynn and Masterson. “The Harry Ransom Center is the leading theatrical and cinematic archive and will display our work properly so that it may be of value to future generations.”

“‘The Best Little Whorehouse in Texas’ was a huge hit, and thanks to Carlin Glynn and Peter Masterson, who saved their scripts, production materials and memorabilia, scholars will be able to understand why the show was so successful,” said Helen Adair, associate curator for performing arts at the Ransom Center. “The collection highlights the wonderful ways in which the Ransom Center’s theater and film collections intersect, illuminating both industries.”

Glynn won a Tony Award for her performance in the Broadway production, and the show was nominated for best musical, best book of a musical, best direction and best choreography.

Glynn donated a shirt she wore during the Broadway production, as well as a hand-made quilt that was constructed and given to her as a gift by the younger actresses in the production.

The collection also includes material related to the short-lived Broadway run of the 1994 sequel “The Best Little Whorehouse Goes Public.”

The other materials in the collection document various film directing projects for Masterson and Glynn’s acting career. Glynn and Masterson worked with Horton Foote and William Goldman on various projects, and there are multiple scripts related to both writers in the collection.

Foote was Masterson’s cousin, and there are scripts related to works Masterson directed, including the films “The Trip to Bountiful” (1985) and “The Convict” (1991) and the off-Broadway production of Foote’s Pulitzer Prize-winning play “The Young Man From Atlanta” (1991). “The Trip to Bountiful” is particularly well-documented because it starred Glynn in the role of Jessie Mae.

The materials will be accessible once processed and cataloged. High-resolution press images are available.