Blog Post Image: Fast and curious: Electrons hurtle into the interior of a new class of quantum materials 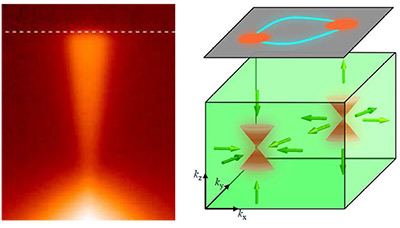 Scientists at Princeton University have shown that negatively charged particles known as electrons can flow extremely rapidly due to quantum behaviors in a type of material known as a topological Dirac semi-metal. Previous work by the same group indicated that these electrons can flow on the surface of certain materials, but the new research indicates that they can also flow through the bulk of the material, in this case cadmium arsenide. Using a technique called angle-resolved photoemission spectroscopy (left), the researchers measured the energy and momentum of electrons as they were ejected from the cadmium arsenide. The resulting data revealed each electron as two cones oriented opposite each other that converge at a point, a telltale sign of the quantum behavior that allows electrons to act like light, which has no mass. A 3-D reconstruction (right) shows that the cone-shaped electrons are able to move in all directions in the material. The top-right panel reveals that these electrons are linked, allowing them to move even when deformed by bending or stretching, an attribute that gives them their topological nature. (Image courtesy of M. Zahid Hasan and Suyang Xu)