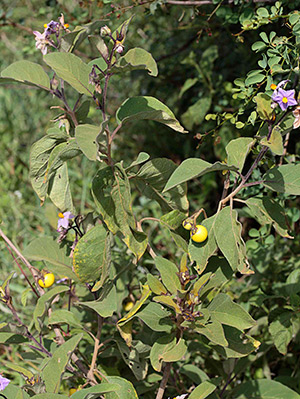 Not a true apple, the Sodom apple is a relative of the eggplant that smothers native grasses with its thorny stalks. Its striking yellow fruit provides a deadly temptation to sheep and cattle. A 2011 study on sheep showed that the plant caused emphysema, pneumonia, bleeding ulcers, brain swelling and death, among other effects. Elephants, however, often rip the whole plant out of the ground and stuff it into their mouths. Impalas devour the plant’s fruit — one impala in the study ate 18 fruit in just a few minutes. (Photo by Robert Pringle, Department of Ecology and Evolutionary Biology)