Student’s Summer Internship Taught Her the Value of Elm Trees

Michelle Bayefsky hopes that London’s future will be filled with elm trees.

The Yale junior spent part of her summer in that city helping to ensure that will be the case.

An International Bulldogs Internship allowed Bayefsky the opportunity to work for an environmental charity called The Conservation Foundation, which among other initiatives is engaged in a project to re-establish elm tree populations in the United Kingdom (U.K.). For Bayefsky, the experience was not only an introduction to environmental work, but also confirmed that small actions can sometimes have a big impact. 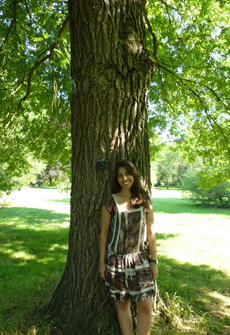 As part of her internship with The Conservation Foundation, Michelle Bayefsky visited the few sites in the London area where tall elm trees are still standing. Image credit: Yale University

During her eight-week internship, Bayefsky helped make an educational film about the history of elm trees in the U.K., and publicized other initiatives by The Conservation Foundation aimed at re-populating the area with elm trees, among other responsibilities. She was particularly excited to work for an organization that has a bit of a Yale connection.

“Along with the connection of elm trees with New Haven (the ‘Elm City’), the roots of The Conservation Foundation go back to an elm planting ceremony that took place in October 1979 in Harlow, Essex, England,” Bayefsky says. “The elm trees were American Sapporo Autumn Gold, since 15 million English elms had already been killed by Dutch elm disease. The Sapporo Autumn Gold trees were developed specifically to be resistant to the disease. Kingman Brewster, Yale president from 1963 to 1977 and then the U.S. ambassador to the U.K., planted the trees at the Essex ceremony.”

While working on the film — which aims to inspire the next generation to care about the future of elms in the U.K. — Bayefsky learned how the trees were once so abundant and inexpensive that when Queen of England Ann Boleyn, wife of Henry VIII, was buried in an elm chest rather than a proper coffin, it was a profound public symbol of disrespect.

Bayefsky’s work on the film also took her to the site of what once was a gallows in London made from elm trees and to a shipyard in Kent, where she learned about the uses of elm in shipbuilding.

One of Bayefsky’s initiatives was to offer elm trees to neighborhood groups, schools, parks, and private landowners in London as part of The Conservation Foundation’s “The Great British Elm Experiment,” a project designed to study why some elm trees survived Dutch elm disease by distributing hundreds of elm saplings. According to the foundation, some 25 million elm trees in the U.K. were wiped out by Dutch elm disease in the past century. Bayefsky visited some of London’s major parks to see the small number of trees in the city that have managed to survive, including several in Hyde Park. 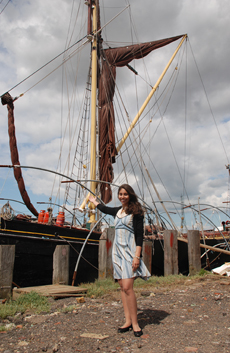 While in London, Michelle Bayefsky learned about the historical importance of elm to the shipbuilding industry. Image credit: Yale University

Bayefsky also helped publicize the foundation’s Gardening Against the Odds Award, sponsored in conjunction with the Sunday Telegraph newspaper to honor people who garden despite mental or physical challenges. The annual award is given in the spring.

A highlight of her experience in London was her work spreading news about a recent book co-written by the head of The Conservation Foundation, David Shreeve, who is also an environmental adviser to the Archbishop’s Council of the Church of England. He and his co-authors — one Jewish and the other Muslim — explore how different religions approach environmental issues and address the topic of why sustainability and biodiversity matter from religious perspectives.

“As part of my work doing publicity for the book, I went to the U.K.’s Islam Channel television studio to watch the authors discussing the book,” says Bayefsky. “It was my first time in a live television studio, and it was fascinating to be able to be a part of it.”

In London, Bayefsky shared an apartment with eight other female students participating in the Bulldogs in London program. She enjoyed making new friends with them and having the opportunity to watch the Olympic Summer Games on a large projection screen in Hyde Park. She also attended one of the qualifying rounds for women’s gymnastics at Olympic Park with her sister Rachel Bayefsky ’09, LAW ’15. Michelle Bayefsky is one of 113 Yale undergraduates who participated in the International Bulldogs Internship program, which allows students to explore a variety of career fields while living and working abroad. Internships are offered in various European cities (including 16 in London) as well as in Uganda, China, Singapore, Israel, and Argentina.

At Yale, Bayefsky is majoring in ethics, politics, and economics and is president of the Bioethics Society. She says her summer experience has inspired an interest in examining how different religions can get involved in environmental action. She is currently enrolled in the course “Theology and Ecology” taught by Professor Willis Jenkins and offered jointly by the Divinity School and the School of Forestry & Environmental Studies. She hopes to attend medical school, where she intends to continue exploring bioethical issues in medicine — a passion inspired by a freshman seminar on “Bioethics, Justice, Freedom, and Religion” taught by Professor David Smith.

Back in New Haven, she’s hoping to come across elm trees in her travels in and around the city, and is considering possible ways to connect campus groups with The Conservation Foundation.

“It was wonderful to be introduced to environmental work with a group of people who feel very strongly about the environment and who believe that there are ways to have a positive impact on the community,” says Bayefsky. “Too often we hear environmental news that is negative. It was so refreshing to be talking about — and having one small part in — all of the good work being done to protect our environment.”