On April 26, Dr. Ketan Bulsara, using state-of-the-art technology, threaded a catheter less than one centimeter in width from the femoral artery in Norbert Tibeau’s thigh into an aneurysm in his brain. The aneurysm had grown to a diameter of two centimeters and bordered on such critical structures as the optic nerve and pituitary gland. If left untreated chances were high that within five years it would either kill Tibeau or devastate him neurologically. 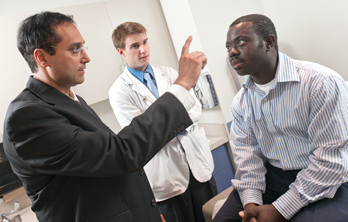 Bulsara, director of neuroendovascular and skull-based surgery for Yale Medical Group, is one of a handful of neurosurgeons in the world who is trained in both skull-based cerebrovascular microsurgery and in endovascular surgery. Along with Yale Medical Group, Yale-New Haven Hospital and medical device manufacturers, he donated his services to treat Tibeau, 28, a native of Haiti who’s studying for the priesthood there.